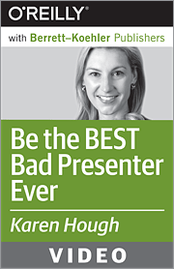 Video Training Course: Be The Best Bad Presenter Ever

Break the Rules, Make Mistakes, and Win Them Over

Karen Hough is the Amazon #1 bestselling author of The Improvisation Edge: Secrets to Building Trust and Radical Collaboration at Work. Her book also made the Top 25 Business Books on 800-CEOREAD. Karen is the founder and CEO of ImprovEdge, which creates corporate training using improvisation. ImprovEdge won the silver International Stevie Award for Most Innovative Company of the Year 2012 and has received the Athena PowerLink Award for outstanding woman-owned business. She is a regular contributor to The Huffington Post.

Karen’s first life was as a professional improviser and actor. She trained with Chicago’s Second City, performed in more than one hundred theatrical productions, and was featured in radio, TV, and film. She lived a second life as a successful executive in IT for network engineering start-ups. She finally became an entrepreneur. ImprovEdge has a presence in six cities nationwide and a client list that includes ESPN, JPMorgan, OhioHealth, Turner Broadcasting, Coach, and Nationwide Insurance, to name a few. Karen is a graduate of Yale University and La Sorbonne, Paris IV. She serves on several boards and is deeply committed to volunteer activities. Karen lives with her husband and three children in Ohio.

Welcome To The Course
So Who Said You're a "Bad" Presenter? 04m 31s

Be A Badder You
Bookends, The Critical Importance of Hooks and Closings 10m 27s
Bookends (A Good Practice!) 02m 13s
Passion 06m 37s

Now Get Out There!
Remember your training, Grasshopper 02m 32s