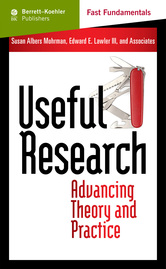 J. Richard Hackman, the Edgar Pierce Professor of Social and Organizational Psychology at Harvard University, who died on January 8, 2013, was fascinated and frustrated with teams, in approximately equal measures, for his entire professional career. Although orginally trained in mathematics at MacMurray College, he turned to social psychology for his doctoral work at the University of Illinois. He taught at Yale for twenty years, where he conducted research on a variety of topics in social and organizational psychology, and then moved to his last position at Harvard. Throughout his career, Hackman mixed studies of groups in the experimental laboratory with his field studies of groups operating in challenging organizational contexts--especially teams that must come up with creative solutions to challenging problems in real time. So he studied flightdeck crews in military and commercial aviation, chamber and symphony orchestras, athletic teams, top management teams, health care teams--and, over the last decade of his life, a variety of teams with the U.S. intelligence community. His most recent prior books were Leading Teams: Setting the State for Great Performances, which in 2004 won the Academy of Management's Terry Award for the most outstanding management book of the year, and Senior Leadership Teams: What it Takes to Make Them Great (with Ruth Wageman, Debra Nunes, and James Burruss). Along the way, Hackman received considerable recognition for his work, including the Distinguished Scientific Contribution Award of the American Psychological Association's division on industrial and organizational psychology, both the Distinguished Educator Award and the Distinguished Scholar Award of the Academy of Management, and the Joseph E. McGrath Award for Lifetime Achievement in the Study of Groups. In addition to his university duties, Hackman served on the Intelligence Science Board of the Director of National Intelligence and on the Board of Trustees of the Orpheus Chamber Orchestra. He and his colleagues developed an online instrument for assessing the standing of teams on the conditions discussed in this book, which can be accessed at http://www.team-diagnostics.com/.