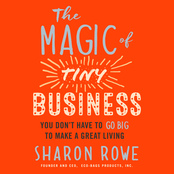 The Magic of Tiny Business (Audio)

Tiny isn't a size—it's a state of mind

Too many of us feel trapped by work that keeps us from living our purpose. We fantasize about starting our own business, yet we're warned against falling into debt, working eighty hours a week, and coping with the pressure to grow. Eco-Bags Products founder Sharon Rowe says there's another way: go tiny.

Like a tiny house, a tiny business is built on maintaining a laser focus on what is essential by living an intentional life. As an entrepreneur and mother, Rowe is most concerned with putting family first, maintaining financial security, and doing something that makes an impact in the world. Using the success story of Eco-Bags Products, Rowe distills the step-by-step process of building a profitable, right-scaled, sustainable venture that doesn't compromise your values. She shows you how to test your concept, manage your money and priorities, and more, while staying true to the “tiny” ethos.

Too many of us feel trapped by work that keeps us from living our purpose. We fantasize about starting our own business, yet we're warned against falling into debt, working eighty hours a week, and coping with the pressure to grow. Eco-Bags Products founder Sharon Rowe says there's another way: go tiny.

Like a tiny house, a tiny business is built on maintaining a laser focus on what is essential by living an intentional life. As an entrepreneur and mother, Rowe is most concerned with putting family first, maintaining financial security, and doing something that makes an impact in the world. Using the success story of Eco-Bags Products, Rowe distills the step-by-step process of building a profitable, right-scaled, sustainable venture that doesn't compromise your values. She shows you how to test your concept, manage your money and priorities, and more, while staying true to the “tiny” ethos.

About the Author
Sharon Rowe (Narrated by)

Sharon Rowe is the CEO of Eco-Bags Products, Inc., which she founded in 1989. In 2010 the company became a certified BCorporation.

ECOBAGS® is the original reusable bag brand. Sold worldwide, it is recognized as “Best for The World” by BCorporation for social and environmental commitments and standards.

Sharon is a thought leader in social innovation and sustainable and responsible production. She speaks regularly on building profitable, mission- and value-aligned businesses. Sharon believes that business is a currency for ideas that shape culture and can be used as a force for good. Her speaking engagements have taken her wide and far—from Yale University to Sing-Sing Prison and from the Nairobi Center for Innovation in Kenya to the Social Venture Institute conference in the Hudson Valley.

She has been featured in Time Magazine, Glamour Magazine, The Wall Street Journal, Entrepreneur Magazine, on NPR – Air America, and in the award-winning documentary, “BagIt.” ECOBAGS® were also featured on The Oprah’s Winfrey Show’s first Earth Day episode in 2007.

Sharon is an active member of the Social Venture Network and the Women’s President’s Organization. She has served on The Hudson River Sloop Clearwater board and is on the Westchester Collaborative Theatre board.

Sharon lives in the Hudson Valley with her husband Blake, a musician and teacher. Her two grown children, Eva and Julian, are living out of state, pursuing their interests. Eva, a civil engineer is focused on sustainable design. Julian, a cartoonist published in The New Yorker Magazine, contributed to this book.

Endorsements
“This is a powerful book—tiny is mighty. Sharon Rowe's simple shift in thinking is a profound idea, precisely what we need to hear.”
—Seth Godin, author of Linchpin

“Honest, intentional, and downright brilliant, this book is a must-read for any entrepreneur dedicated to launching a value-driven organization in an ever-changing world. Sharon has built a masterful guide to finding the optimal balance between purpose and profit.”
—Onyeka Obiocha, Director of Innovation, Yale University Center for Public Service and Social Justice

“This is the best business book I've ever read. It's Essentialism and Start with Why meet Good to Great with a sensibility for the way life actually unfolds. From comic storytelling to pinpointed nuggets of wisdom, The Magic of Tiny Business is a book to keep on hand. One read through prepares the reluctant and curious to-be founder for what's to come. Down the road, opening any page and reading any sentence will offer a touchpoint of sanity that every businessperson needs.”
—Caroline Duell, founder and CEO, All Good

“As a company that started with only $350—and that today provides funding to emerging women-owned businesses—we agree that tiny businesses are magical. They have the power to change the world through their vision and passion. Sharon Rowe is living proof that tiny businesses can, indeed, serve the greater good while serving their bottom line.”
—Amy Hall, Director, Social Consciousness, Eileen Fisher, Inc.

“The Magic of Tiny Business is a compelling story of true entrepreneurship that is relatable, inspiring, and full of simple, practicable steps to living your desired business journey. It helps us look inside ourselves and inside the business as to what matters really in making a great living without losing our mind along the way! Sharon guides us through a story that can only make your business better and help you reflect on the journey of a life worth living!”
—Henry Cross, Executive Director, Hosh Yoga and Hosh Kids

“There's nothing tiny about the vision behind this inspirational book that's part memoir and part how-to guide for dreamers who yearn to be doers and start up their own businesses. Authentic, transparent, and funny at times, Rowe will entertain as well as inspire you to action with her stories from the trenches and lessons learned over her successful career as a mission-based business owner and thought leader. This book's premise is the antithesis of the ‘go big, go broke' or ‘go big, go home' masculine concepts that define what it means to be a winner. Instead, Rowe challenges her readers to define what success means for them and then build a business to support a balanced vision. Anyone who believes that time is worth more than money is a great candidate for reading this book. So if you're itching to do something with your life that lights up your passion and provides a paycheck, settle in for a good read. Keep a pen and paper at your side because you're going to have tons of actionable ideas flowing your way page by page!”
—Sandra Ann Harris, founder of ECOlunchbox

“Sharon challenges the Wall Street mindset of how businesses should grow and should be run. This is an inspiring book for all entrepreneurs looking to embrace an alternative paradigm—where tiny businesses are sustainable, purpose-driven, and successful.”
—Nona Lim, founder and CEO, Nona Lim Foods

“‘Begin with your life in mind' is the mantra that drives this book. I love the mix of (true) anecdotes, exercises, and challenging questions that poke holes in the traditional assumptions about business success. The magic of the tiny business approach is the intentional commitment to grow our companies in a way that supports the quality of our lives.”
—Ellen Ornato, Founding Partner, The Bolder Company


“The writing was an appealing mix of Zen-like wisdom and practical, actionable business advice. The overall effect was honest, human, useful . . . food for thought, a manifesto for action, and a blueprint for success in one book!”
—John Ford, Dovetail Publishing

“Craft the life you want—with a business to support it. It's the message we all need to hear.”
—Susan Danziger, founder and CEO, Ziggeo.com

“The Magic of Tiny Business offers much-needed relief from a dreary life pursuing business as usual. Rowe proves it is not only okay to prioritize a high quality of life and an honorable vocation, but it is exactly this magic combination that makes it all worthwhile. I encourage people to follow the simple and timely principles of this book.”
—Shawn Berry, cofounder/worker-owner, LIFT Economy

“If you're an entrepreneur, founder, or aspiring leader, Sharon Rowe will remind you why you love business and how much good you can do in the world—at any size.”
—Corey Blake, founder and CEO, Round Table Companies

“A delightful wake-up call to what's possible when you want big impact, big satisfaction, and big fulfillment done your way. With Sharon Rowe, tiny but mighty takes on a whole new meaning! Sharon shows you how to have a beautiful business that is a blessing to your staff and your community no matter how big or how small it may be.”
—Dr. Judith Wright, coauthor of The Heart of the Fight

“In a business world often defined by an ethos of ‘move fast and break things,' The Magic of Tiny Business is a welcome invitation to rethink how business is built and how we define success. The assumption that building a business means embracing rapid growth and scaling leaves out the opportunity to build something more intentional and personally meaningful. Through her book, Sharon Rowe translates the wisdom she has gained over her years in business into a practical guide and gentle nudge to get going on building a business that will fulfill you.”
—Jessica Quinn, Managing Director, Civic Hall

“Rowe's book is a refreshing perspective on entrepreneurship, reminding both new and experienced founders to take a deeper look at what it means to be successful, happy, and impactful in our work.”
—Desiree Vargas Wrigley, founder of Pearachute

“The Magic of Tiny Business is a practical, hands-on guide to launching and running an impact business (so your business doesn't run you).”
—Denise Taschereau and Sarah White, cofounders of Fairware

“Sharon shows us the magic that unfolds when we use business to serve us and are not servants to it.”
—Rose Penelope L. Yee, CEO, Green Retirement, Inc.

“Building a business that solves social or environmental problems can be a daunting endeavor. The Magic of Tiny Business confronts the fears commonly faced by entrepreneurs who strive to change the status quo. Through her personal journey of creating and growing her business, Eco-Bags Products, Sharon Rowe shares pearls of wisdom on how to zero in on the mission while maintaining a balanced lifestyle.”
—Alisa Gravitz, President and CEO, Green America

“How lucky are today's entrepreneurs to have this gift of reflection, inspiration, and practical guidance for their journey? Sharon articulates the grand purpose behind a ‘tiny business'—an entrepreneur's North Star. In the constant-swirling mind of a business owner, Sharon's words are calming and a reminder of how to focus on what's important and define success in our own terms.”
—Rebecca Rodskog, cofounder of FutureLeaderNow and founder of [email protected]