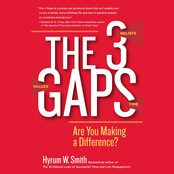 Are You Making a Difference?

For a Better Life, Close the Gaps!

Smith offers a practical blueprint that we all can use to recognize and close each of these three gaps and illustrates how it can be done through inspiring true stories. The 3 Gaps provides the concepts and the tools needed to establish a solid foundation from which you can help make the world a better place.

Book Details
Overview
For a Better Life, Close the Gaps!

Smith offers a practical blueprint that we all can use to recognize and close each of these three gaps and illustrates how it can be done through inspiring true stories. The 3 Gaps provides the concepts and the tools needed to establish a solid foundation from which you can help make the world a better place.

About the Authors
Hyrum Smith (Author)

Hyrum W. Smith is a distinguished author, speaker, and businessman. Hyrum stepped down as Chairman & CEO of the Franklin Covey Company, Franklin Quest’s successor, in 1999. He continued as Vice-Chairman of the Board until 2004. For four decades, he has been empowering people to effectively govern their personal and professional lives. Hyrum’s books and presentations have been acclaimed by American and international audiences. He combines wit and enthusiasm with a gift for communicating compelling principles that incite lasting personal change.

Hyrum is the author of several nationally-acclaimed books, including The 10 Natural Laws of Successful Time and Life Management, What Matters Most, The Modern Gladiator, You Are What You Believe and he co-authored Excellence Through Time Management.

Hyrum grew up in Honolulu, Hawaii, and then spent two years in London, England. He returned from London and was drafted into the army.

He was married in 1966 to Gail Cooper while on leave. They have six children (five living) and 24 grandchildren (22 living).

After graduating Honor Graduate from Officers Candidate School, he commanded a Pershing Missile unit in Germany. Hyrum graduated from Brigham Young University in 1971 in Business Management.

In 1984, he became one of the original creators of the popular Franklin Day Planner. He also co
-founded the Franklin Quest Company to produce the planner and train individuals and organizations in the time management principles on which the planner was based.

Hyrum has received numerous honors and community service awards, including the following:

Hyrum enjoys golfing, shooting pistols and rifles, listening to classical music, horse riding and spending time with his family at his ranch in southern Utah.

Richard I. Winwood (Foreword by)
Endorsements
“If you want to quickly and effortlessly close the gaps from where you are to where you want to be, read this book and apply it now!”
—Mark Victor Hansen, cocreator of the Chicken Soup for the Soul series, whose books have sold 500 million copies

“Rarely are such profound principles taught with such simplicity and accessibility. Every work group should read and apply this message.”
—Catherine Hormats, entrepreneur and cofounder of Social Security Advisors

“To successfully manage a team, employees, or a family, we all must first manage ourselves. That is the great lesson of The 3 Gaps; and the great gift is that Mr. Smith so clearly tells us how.”
—Michelle Baron, award-winning producer/writer of worldwide family entertainment

“The 3 Gaps is a simple yet profound book that will enable you to live a better, more fulfilling life and have a positive impact on everyone around you.”
—Stephen M. R. Covey, New York Times bestselling author of The Speed of Trust and coauthor of Smart Trust

This third edition of an international bestseller—over 2 million copies sold worldwide and translated into 33 languages—d...

The expanded and revised edition of Community tackles the hysteric rise of isolation and fear in a digitally interconnect...