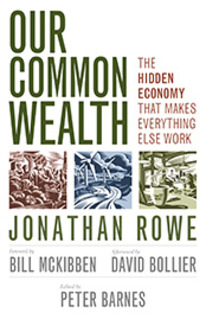 Our Common Wealth:
The Hidden Economy That Makes Everything Else Work

San Francisco, CA -- “The commons" is a term that denotes everything we share as opposed to own privately. Some parts of the commons are gifts of nature: the air and oceans, the web of species, wilderness, and watersheds. Others are the product of human creativity and endeavor: sidewalks and public squares, the Internet, our languages, cultures, technologies, and infrastructure. No one has exclusive rights. We inherit them jointly and hold them in trust for those who come after us.

We all defend the commons and not know it. What’s been missing is a story that unifies all these seemingly unrelated battles with the force of a powerful idea. This is what Jonathan Rowe provides in Our Common Wealth: The Hidden Economy That Makes Everything Else Work (Berrett-Koehler, April 2013).

In graceful and down-to-earth prose, Jonathan Rowe illuminates the scale and value of the commons, its symbiotic relationship with the rest of the economy, its importance to our personal and planetary well-being, and how it is threatened by privatization and neglect.

Rowe also describes a growing movement to recognize and defend the commons on many fronts: community initiatives, legal actions, and visionary proposals such as a “sky trust” to charge polluters and distribute the proceeds to all of us. Simple gestures can be powerful too: Rowe relates how he set some benches in a vacant lot and watched a public gathering space take shape.

By examining these institutions, communities, and educational systems as well as the ways in which communities and even nations are governed, the authors make a plea for a more sustainable, healthier, and socially beneficial future for all by establishing and thriving in the commons.

Jonathan Rowe was born in 1946 in a small town outside of Boston, Massachussetts. A 1967 graduate of Harvard College, he earned a law degree from the University of Pennsylvania and in the early 1970s was one of Ralph Nader’s original “Raiders.” Later he served on staffs in the U.S. House of Representatives and Senate, where was a longtime aide to Senator Byron Dogan (D- North Dakota). He was a contributing editor to the Washington Monthly and Yes! Magazines, a staff writer for the Christian Science Monitor, and a contributor to Harper’s, the Atlantic Monthly, the Columbia Journalism Review and many other publications. In addition, he cofounded the Tomales Bay Institute, On the Commons and West Marin Commons. He died unexpectedly on March 20, 2011.

Peter Barnes is an entrepreneur and writer who started several successful businesses, including Working Assets/Credo. He has written for Newsweek, the New Republic, and numerous other magazines, and is the author of five books, including Who Owns the Sky? and Capitalism 3.0. He cofounded On the Commons with Jonathan Rowe and lives in Point Reyes Station, California.

How Wealth Rules the World

Saving Our Communities and Freedoms from the Dictatorship of Property