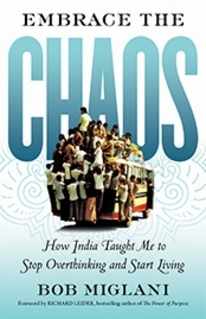 by Bob Miglani
Foreword by Richard Leider, Author of The Power of Purpose

“If you feel your life is running you rather than you running your life, this book will show you how to achieve peace, order and calmness in the middle of the storm.” -- Brian Tracy, author of Kiss That Frog

Stress can suffocate. Like many people, Bob Miglani was constantly overwhelmed and anxious about his job, his finances, and his family’s future. It was a chance invitation to India, the land of his birth that finally freed him.

India, Miglani writes, is “the capital of chaos”: over a billion people living on one-third the space of the United States, a bewildering mix of different languages, religions, customs, cultures, and castes. And yet somehow things get done and people are generally happy. India made Miglani realize that he had to simply accept “the unpredictable, uncertain, imperfect, and complicated nature of life,” instead of fight it.

Throughout the book, Miglani tells funny and moving stories of his trips to India and what each encounter taught him. What happens in an Indian village with no money and a plane to catch? What keeps a rural Indian health worker motivated despite the enormous need and such limited ability to help? Miglani learned to focus and control his own actions, words, and thoughts. Instead of endlessly pondering possibilities, he found it was better act, even imperfectly-to move forward, make mistakes, trust his intuition, and find his purpose.

Bob Miglani is senior director at a Fortune 50 Company in New York City, where he has been embracing the chaos for twenty years. He came to the United States in 1979 and helped run his family's Dairy Queen business in New Jersey. His experiences there are the source of his first book, Treat Your Customers.

How India Taught Me to Stop Overthinking and Start Living

The Myths of Technology Change