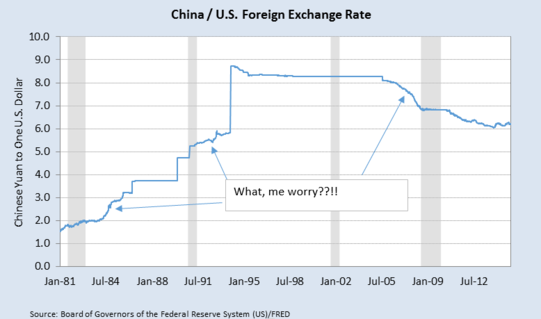 Just a brief note of confusion and befuddlement regarding a position on currency in the TPP that’s been uncritically picked up by news sources lately, including the WaPo today.

The position touted by the piece is that since China’s currency has floated down relative to the dollar in recent years (see figure), and their trade surplus is also significantly diminished, we don’t need to worry about them or other trading partners managing their currencies to get an export edge over us in the future.

This is wrong for at least three reasons.

First, as the title of this post suggests, just because something isn’t happening now doesn’t mean it won’t happen again later. The figure shows numerous periods of the yuan floating for awhile before a dollar peg again took hold.

If anything, I’m concerned that by announcing to the world that we can’t do anything about currency management without implicating our central bank, pro-TPP (and anti-currency-rule) forces are giving competitors the green light to revert to their old ways in this space with impunity.

Second, everyone, including the Post, is focusing only on flows while ignoring stocks. China still holds large dollar reserves (~$4 trillion), as does Japan, and this too affects exchange rates. As Bergsten and Gagnon put it: “China’s heavy past intervention has lingering effects on the level of the exchange rate, keeping it considerably lower than it would otherwise be.” Dean Baker makes a compelling connection on this point as well:

It is widely believed by economists that the Fed’s holding of $3 trillion of assets is holding interest rates down in the United States. The idea is that by holding this stock of government bonds and mortgage backed securities, it is keeping their prices higher than they would be if investors had to hold this stock of assets. (Higher bond prices mean lower interest rates.) If we accept the view that holding a large stock of bonds affects their price, then it must follow that the decision of China’s bank to hold a large stock of foreign reserves raises their price relative to a situation where investors held them. This would mean that China’s central bank is continuing to prop up the value of the dollar against its currency, even if it is not actively buying dollars.

Finally, a touch of game theory. If currency management is passe’–yesterday’s problem, as the Post implies–then why would it allegedly crash the TPP deal to include measures against it? If countries are so game to join the treaty, why would rules against doing something they don’t do anymore drive them from the negotiating table?

Here’s a DC truism for you: in their zeal for the deal, these trade deals make people say all kinds of unfortunate things.