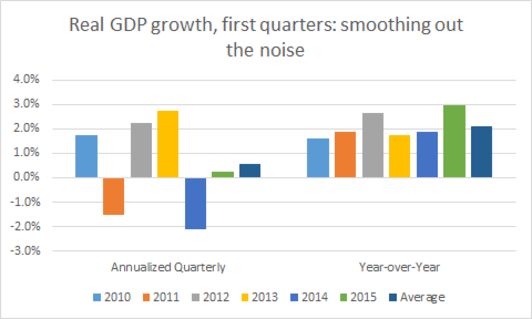 There’s been a significant disturbance in the force for those of us who pay attention to government economic data releases, specifically regarding GDP. A number of commentators, including CNBC’s Steve Liesman, have noted a negative pattern regarding first quarter GDP data. That is, as this San Francisco Fed note shows (see Figure 2), in the last few decades, first quarter growth has been consistently lower than the growth occurring April through December. No less than Fed Chair Janet Yellen alluded to this problem in a speech last Friday.

You might think, “what’s wrong with that?” Perhaps there’s something going on that tends to reduce growth in the first quarter relative to the other quarters. But the whole point of seasonally adjusted data is to squeeze out any such systemic, reoccurring factors at seasonal intervals. What analysts want to know is how is growth doing once we control for seasonal factors.

Cutting to the chase, it appears that a problem has crept into the seasonal adjustment process at the agency that calculates GDP, and they’re working on a fix.

As the SF Fed analysts show, if you squeeze the overlooked seasonal factor out of the quarterly GDP data, you get an annualized growth rate of 1.8% in the first quarter of this year, instead of the reported growth rate of 0.2%. That’s a big difference in an important indicator.

Those who follow my takes on these “high-frequency” data reports know that while I certainly note the quarterly result, I tend to focus more on the year-over-year trend. For example, instead of looking too closely at the annualized change for 2014q4 to 2015q1, I focus on 2014q1 to 2015q1. While this approach downplays the most recent dynamics, it also downplays the statistical noise in the near-term changes, and my experience is that this has turned out to be a worthy tradeoff.

Moreover, year-over-year also generally avoids problems with seasonal adjustments, of the type going on with the GDP numbers. If “residual seasonality”—seasonal factors that hid under a rock during the initial seasonal adjustment, and thus remain in the SA data—is embedded in Q1 data, that means you’ll still get a decent approximation of the trend if you take year-over-year changes. Since the bias is in both Q1 data points, you don’t see it so much in the change between them.

The figure below shows what I mean. On the left, you see annualized first-quarter changes, from 2010 to 2015, along with the average of all the bars. On the right, you see year-over-year changes. The bars on the right show a pretty steady real growth rate of around 2%, which is where around where I and others judge trend GDP to be these days. The bars on the left are much noisier and their average comes to 0.6%, a growth rate inconsistent with most other indicators, particularly job growth.

Speaking of jobs, how do we know the Q1 bias isn’t in those numbers too? Well, the figure below takes the same approach as the previous figure, but using payroll employment. The patterns in both sets of bars is much closer, as are the averages, and there’s no evidence of a negative bias to Q1 employment growth. So sure, go ahead and check out the monthly or quarterly changes for (noisy) hints about recent developments, but when it comes to your assessment of underlying trends, focus on the longer-term changes.