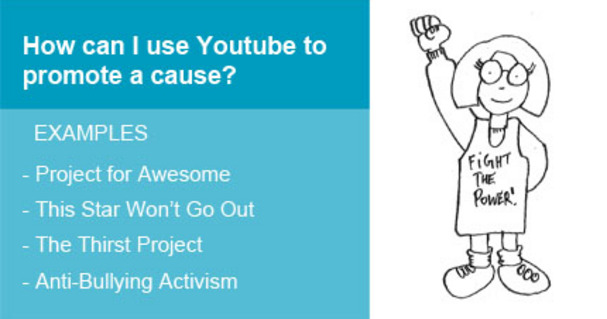 At VidCon, I attended a panel called, “With Great Viewership Comes Great Responsibility.” The panel description was, “Digital media offers creators the opportunity to incorporate charity work into their videos and use their platforms to support causes they believe in. Hear from charities and creators on the best ways to work with causes.” Here are descriptions of the panelists, and what I learned about people fighting the good fight on YouTube. I hope it inspires you to fight YOUR good fight on YouTube.

The Project for Awesome is an annual video contest that raises money from YouTube fans, for whatever charities make the best videos about themselves. Here on their YouTube channel you can watch contest winner videos and messages from the contest organizers (the vlogbrothers.) Here’s a great video about Project for Awesome from Wheezy Waiter, a YouTube comedian with impressive subscription levels. 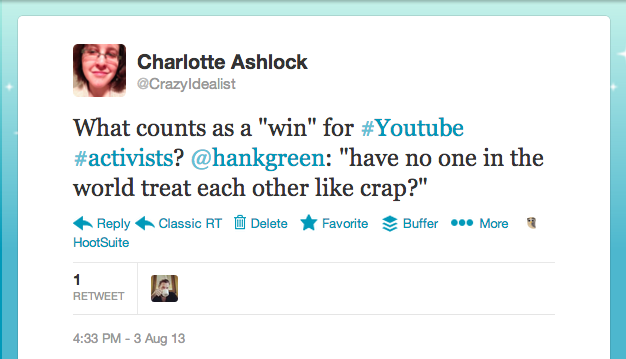 One of the most memorable moments of the panel was listening to Hank Green’s thoughts on activism and age. He said, “When you’re young, you’re always saying -THE WORLD DOESN’T HAVE TO BE THIS WAY!’ Then you get a little older, and you start thinking, “Yeah, but it IS this way, and I’m getting REALLY tired…” A ripple of laughter went around the room and Hank Green remarked sardonically, “I noticed all of the older people and none of the younger people were laughing at that one.”

The Project for Awesome harnesses the passion of young people to get things done and draw attention to causes. YouTube’s algorithms favor videos that have the most likes, comments, and shares, so the Project for Awesome fandom will give the thumbs up to all the charity videos to make sure they get visibility on the YouTube system. It’s gaming the system, but at least it’s gaming the system in a good cause.

One teenage girl was so inspired by the vlogbrother’s impassioned pitch for Project for Awesome, that she stayed home from school and wrote comments under charity videos all day long. That girl was Esther-- read more about her in the next section.

This Star Won’t Go Out

This Star Won’t Go Out is an organization that financially assists families whose children have cancer. It was started in the name of Esther, a 16-year old girl who died of cancer. (Esther is Persian for “star.”) You can follow Esther’s mom, the organization’s leader, on Twitter.

When confined to her home by her illness Esther found community and meaning on YouTube, so the YouTube community remembers her and does a great deal to support her organization. A book of Esther’s writings will be published by Penguin in the spring.

Watch this Video on the TSWGO Channel

Here’s a quote from Esthers’ mom I live-tweeted at the panel:

The Thirst Project is a youth activism organization that raises money for clean water in the developing world. Did you know that more people die from unsafe water than from all forms of violence, including war? Thirst Project knows, and is determined to make you know.

Their awareness-raising methods are entertaining, attention-getting, & creative, and include a lot of new media. They get YouTube stars (and also more traditional media figures, like actors from the Nickelodeon show or the Twilight movie) to make videos advocating for the Thirst Project. They even made up a YouTube superhero to raise awareness for the cause of fresh drinking water.

Here’s an example of one of the many videos young celebrities did for the Thirst Project. Savanna Outen, (a pop singer with nearly 500,000 subscribers at the time of this writing) tells her fans to ask their families to give them “one less ugly sweater” for Christmas and instead spend the money on a well in Zimbabwe.

Watch the video on Savannah's channel

Other videos engage you in the lives of the people in need, and make those people real to you. Online video decreases the distance between me, and a young woman my age in Zimbabwe carrying a jar of water on her head for 4 hours a day.

No bull is short for no bullying. You may have seen a lot of articles in the paper recently about the cyber bullying epidemic. Well, NO BULL fights bullying in all forms with the power of transmedia.

The Great American No Bull Challenge http://nobullgreatamerican.votigo.com/nobullgreatamerican invites teenagers to make videos protesting bullying and offers cash prizes to the winners. Scott Hannah and Tyler Gregory were our panelists at VidCon, and are known as “The No Bull Guys.”

See the NO BULL Challenge channel

Another part of the movement is to protest bullies by sharing their actions on social media with the hashtag #nobull. So next time you see a bully, call them out!

I hope these examples of YouTube activism have shown you that online video can be one of your most effective strategies for raising awareness for a cause. Good luck making your own videos.