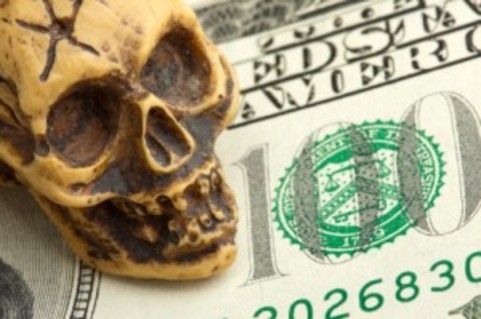 New Orleans    In a startling unanimous decision, the US Supreme Court overturned an 11th Circuit Court of Appeals decision finding in favor of Bank of America that even bankruptcy protection does not allow underwater homeowners the ability to escape the obligations of second mortgages.  The impact of the decision allows zombie banks to continue operating on the basis of balance sheets reflecting virtually lifeless real estate holdings and makes these beleaguered homeowners into walking dead debtors with virtually no hope of a second chance.The Supreme Court once again reminds Americans that the Constitution is fundamentally about property rights and that the sanctity of a contract trumps all vestiges of common sense.

Generally speaking, a home is commonly classified as “underwater” if the value of the outstanding mortgage is 25% higher than the current market value of the home.  Remember the mortgage we are talking about here is the first mortgage.  The second mortgage is satisfied after the first is fulfilled.  Many of these second mortgages are home improvement loans.  Others arose from the need to finance children’s education or medical emergencies by attaching what has historically been the primary asset creating citizen wealth for the vast majority of low and moderate income families in the country.   Bank of America in their court filings estimated that there were 2.1 million underwater homeowners with second mortgages at the end of 2014.   Others like Zillow estimated that there are still 8 million homeowners who are underwater and most real estate experts estimate that it is likely that half of them have some kind of “second” on their homes.  This is not an insignificant problem in either the economic recovery or the hope for narrowing the equity gap.

Of course not all of these families had declared bankruptcy, partially because banks and others have done an amazing job over recent years with Congress in making bankruptcy both harder to achieve for desperate families and less valuable as a chance for a clean slate and a second chance.  Filing for bankruptcy does not allow someone to wipe out a mortgage debt or a student loan debt for example.  The mortgage obligation is what forces an underwater homeowner into foreclosure.  The best hope for the debtor is that surrendering what used to be an asset to the bank, calls quits to that debt.  In 2007 and 2008 when ACORN was negotiating with big banks and mortgage loan servicers as the implosion began, I was at some of those meetings.Executives then believed that they would just have to wipe out their second mortgage portfolios as worthless.

The Supreme Court’s decisions says, “no way, you’re stuck.”Hey, some day in the by and by, real estate values may go back up, allowing the loan to be collected.  Some of these properties are so far underwater that it won’t be a year but a generation for that to happen.  For the banks paying a dollar on that loan every 90 days allows them to still call it a performing loan, helping their zombie balance sheets, and leaving the debtor, desperate for a clean start, carrying even more weight. The Justices say, “dude, it’s a contract, didn’t you get that?”  The debtors, like millions of others, were on the merry-go-round being pushed by these same bankers and promoters in the real estate bubble into these sucker bets.  These weren’t contracts as much as cons.

Only death relieves some of these debts.It’s already legal for 25% of someone’s social security to be attached.  Now the Supreme Court has just locked another ball and chain onto untold numbers of families with little hope for the future but dragging the weight behind them, sentenced to a life as walking dead, not in debtors’ prison, but in a permanent debtors’ probation of sorts with little or no chance of escape.