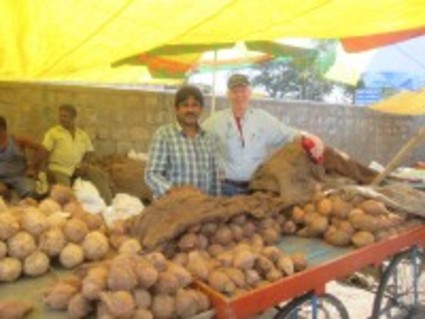 Bengaluru       Suresh Kadashan, ACORN’s head organizer for South India based in Bengaluru, and I started our day as usual at the India Coffeehouse, run by the national Coffee Board.  Even before we left for the series of buses, the G8 and the K2, that would take us to meet with some of our street vendor leaders in market places we were still trying to organize as well as ones where we had won big victories, Suresh began briefing me on some of the one-year old BJP conservative Modi government’s attacks on labor in order to curry favor from business and big developers.

In short, Modi’s so-called “labor law reforms” are a direct attack on millions of workers in the name of more efficiency by consolidating various labor laws.  The basic pitch by the government is to streamline forty-four different labor laws into only five of them, and as Suresh explained it to me to put all disputes with unions and workers into one Labor Court.  Unions are in an uproar and making a decision on a national general strike at the end of May in protest to these proposed new law consolidations.

It’s not just a matter of having to deal with a bureaucracy.   One Modi proposal is to eliminate coverage and labor law protection to small factories and enterprises with less than 40 workers.  According to one union leader:

the main purpose of the Small Factories Bill is to keep 70-80 per cent workforce out of the existing labour laws which provides some rights to them.

That’s a lot of workers.   In another proposal companies would no longer have to consult with the government before laying off workers where one-hundred or more are employed.  The new requirement would be pushed up to three-hundred workers. The new laws beside greasing the wheels for business and eliminating much of the already flimsy safety net for India’s workers also directly attack union organizing, which got my attention as well.

The unions are more agitated with the proposal according to which at least 10% of the work force or 100 employees will be needed for registering a trade union. At present, seven members can form a trade union irrespective of size of the establishment. Although our organizing is largely in the informal sector among hawkers, domestic workers, auto rickshaw drivers, and recyclers, we depend on unions, though relatively small in India but heavily concentrated in the public sector, as important political allies to provide ballast in the basic push for workers’ rights to organize and to protect livelihood.   Because various national federations are usually aligned with specific political parties there is usually a hedge against drastic repression.  The union partner of the governing BJP is as mad as all of the other formations, which is a clear sign of bad trouble. The government has made it clear that these are steps they are taking to create “a better business climate.”   That is surely a program that translates into trouble for workers!

Before calling it a day and running for the G9 bus, we looked at the new market space we had won for our hawkers under the flyover.  I had listened to our members talk about this last year, and now the first part is build and numbered and waiting for the allotment to our hawkers.

Unfortunately this seems to be just the kind of union victory that the Modi government wants to try and legislate away.