Notes for My Father from France 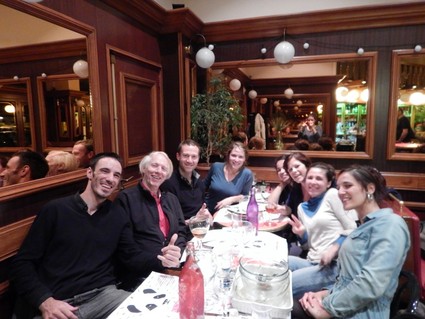 Paris     I brought coffee and chicory from New Orleans so that I was never stranded too far from home even while in Poland and France. In France there was curiosity about my concoction, but a certainty about chicory because though we source ours in Nebraska in order to wave the local banner, chicory is grown widely here, and drunk straight by some, including one of the Grenoble organizers. Like the way the Civil War blockade gave New Orleans natives – and interlopers like me – a taste for it that couldn’t spit out of their mouths, I gathered the inability to get access to any coffee beans in the 20th century conflagrations had led some grandchildren to still brew a cup of chicory having acquired the taste at their grandparents table.

There are little signs that are distinct in France like the five-foot tall pencil on the street signals that a school is nearby in Grenoble. The kiss of greeting on each cheek for everyone being met is a nice, dear touch, though even when I thought I was mastering the task I was told not to forget to make the sound of lips pursing in an air-kiss as the cheeks were touched lightly.

Food is an obsession and bread finds its way to every meal and table. Cheese is almost as constant along with the claims for various regional varieties. It is amazing that people are not gargantuan and obese. My best guess is that practice of continual cultural communal eating meal after meal has decreased the dependence on unhealthy fast food diets fueled by sugar-saturated drinks. Add walking and cycling to work here and there and even though gyms also don’t proliferate in France as they do in the States, people seem pretty trim in the main.

On most organizing staffs lunch is as widely forgotten as remembered, but in France lunch breaks are almost ritualistic, even among the organizers. Often people brought in snacks or croissants and broke to enjoy them as well. The women organizers always in the ReAct office seemed to share a giant chocolate bar on a daily basis that they would walk over and break off a small piece to enjoy off and on throughout the day. At one day’s break that some of the organizers shared with me, the discussion noted with some concern that other organizers down the hall had only shared one lunch during the week with their comrades. I didn’t want to add that the reason was likely that the others were on a community organizing regime modeled after ACORN in Canada and working different hours. Early in the week after I moved from one meeting to another, an organizer asked me if I wasn’t ready for a “statutory break,” referring to the French labor code requirements. I think I made it a joke the rest of my time in France, but I suspect everyone took it very seriously.

Certainly, the rigidity of the French workweek at 35 hours was well respected. The negotiations allowed under the code to move the hours with premiums paid to 39 was reportedly specific and intense. During the weekend training session in the mountains for leaders and organizers, I had to ask what happened to some of the more junior staff when they didn’t stay for Sunday and in some cases took off on Monday. Saturday worked means a weekday off. All of this takes soft paws to a whole new place.

But, what a great culture. There was little doubt when some there was a chance for organizers to watch some film clips on the work, that pizza would be coming, too. It would have also been a giant faux pas if my last evening meal before returning to the USA before dawn would not have brought as many organizers and staff as available out to a community meal somewhere. We ended up in a neighborhood bar not far from where one of the staff lived, and he managed to convinced the bar owner to go into the kitchen and within thirty minutes produce a great meal with a number of local Grenoble and regional dishes “to show the American.”

What a great community and what great fun! Hard not to respect such a culture and what it builds in social capital, and notice that in our capital driven work ethic we are so chained to the wheel, we don’t even give our schedules a second thought. One of the coordinators, Adrien Roux, having spent a month with me in New Orleans reportedly had come back to France and made the comment that for all he had learned about organizing in his visit, he still found it a mystery whether or not organizers ever ate in the US.

Loyal To the Sky

Notes from an Activist

India Notes for My Father
Bengaluru     Every trip is an education.   Every trip to India is a contradiction. The Chennai train station had free wi-fi for one hour, but so few seats that most people sat on the floor.  The...
Read more...

The Book of My Father
I love and deeply appreciate my 84-year-old dad, but it hasn’t always been easy. I’ve had a strained relationship with my father for most of my life. As a kid, he felt very distant,...
Read more...

Twenty Years in the Making – A Song For My Father
I am sitting at the family piano in the living room of the house where I grew up. Aside from a few boxes, the piano is the only thing left in the house. Mom is moving into a senior apartment...
Read more...

A Note from Nature
Dearest human being, Here’s what I can teach you about life today. Everything has a beginning, a middle and an end. A spring, summer, fall and winter. A waxing and a waning cycle. An ebb...
Read more...

Fathers of Invention? Innovative Dads Make Waves
Millennial fathers are reinventing parenting, and a variety of new products and services help them get the job done like never before.   Millennial dads. They’re unlike your father or...
Read more...

Notes, Citations, and Bibliographies
Read the Agreement with Foreword/Preface/Introduction Contributors to Berrett-Koehler Works here.Berrett-Koehler requires all authors to provide sufficient information to lead readers to the...
Read more...

New whistleblower protection law in France not yet fit for purpose
Check out the full story via Transparency International here! Michel Sapin, the French Minister of Finance, promised to deliver a comprehensive anti-corruption law that included protection for...
Read more...

Yes Magazine: “What I Learned From My March With Democracy Spring”
This week, the Democracy Spring, part of the growing coalition calling on Congress to “end the corruption of big money in our politics”, culminated its march  from Philadelphia to Capitol Hill....
Read more...

My Grandson – The Graduate
My vision for my grandson, Evan, has always been huge. First and foremost a golf superstar. We have been golf buddies since he could barely swing a club. His vision is as far reaching as what...
Read more...