Make No Mistake, India’s Modi is Not a Progressive on Any Score 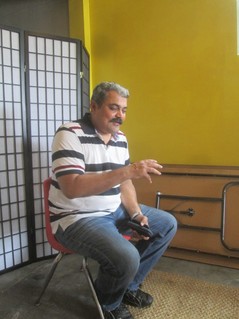 Vinod Shetty of ACORN Foundation of India and the Dharavi Project

New Orleans    In one of those rare and marvelous coincidences, I had foregone my annual trip to Mumbai, because Vinod Shetty of ACORN Foundation of India and the Dharavi Project was amazingly going to be in New Orleans when I returned, giving us days to catchup on events there and elsewhere in India.

Invariably at the Fair Grinds Coffeehouse Dialogue and elsewhere, the subject would come around to Prime Minister Modi’s first year in office and the prospects for the country in the years to come.  Shetty could not have been more pessimistic or clearer in his continued warning of the dangers to come under Modi as his increasingly rightwing, conservative BJP party continues to consolidate power.

As a lawyer or advocate who practices still before the Bombay Labor Court, Shetty said that in meetings he had attended to discuss the Modi proposed labor law clawbacks of union and worker rights, even HMS, now the country’s largest union, and the union traditionally allied with the BJP as their patron, has been strident in arguing its case in opposition
to the changes.  Shetty was convinced that not all of the package will be approved, but also believed that Modi and the government will be relentless in trying to erode these rights.The primary example is the state of Rajasthan, where many of these so-called reforms have already been implemented in modified ways where the state could act in areas not preempted by the central government.  There, in order to allow layoffs in enterprises with 100 workers or more, Rajasthan had extended the severance payments from 30 to 45 days in exchange for eliminating the state approval of the layoff.   The Modi proposal is to eviscerate protections for workers from redundancy below 300 in a workplace.

The message being sent by the attack on NGOs from the Modi government is essentially, shut up or starve.The clear objective of the government is to silence opposition to development and business wherever possible.  The exceptional inclusion of action against the Ford Foundation is a signal in Shetty’s view to one and all that the government will only approve grants that are pristinely free of anything remotely like advocacy.  Toe the government line or else!

Shetty predicts that underlying some of the government initiatives will be special emphasis on curtailing NGOs and other efforts by religious organizations of all stripes other than Hindu. The Modi record from Gujarat is frightening, and Shetty believes more is coming.

Meanwhile The Wall Street Journal accuses Modi of not moving quickly enough to force the coal industry to be more productive and efficient, citing numerous business interests throughout India, contrary to the hopes of environmentalists around the world who had thought they were seeing something different in the early signs from Modi.  Others are
clamoring for a change in tax rules, a cutback in subsidies to the poor, and other radical changes.

Modi probably thinks that opening a front against NGOs and labor will be enough red meat to quiet his business backers demanding more radical changes, but for the Indian people none of this seems like good news to come.