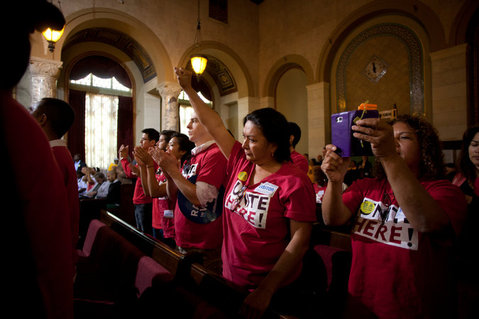 Members of Unite Here Local 11 in the Los Angeles City Council chambers on Tuesday before the Council voted to increase the city’s minimum wage from $9. Credit Jenna Schoenefeld for The New York Times

Little Rock       Lower wage workers might not be reading the paper, but it won’t take long before the word gets to everyone that Los Angeles, the nation’s second largest city, just took a giant leap forward by almost unanimously passing an ordinance to raise wages from $9 per hour where they stand now to $15 by 2020.  They join Seattle, San Francisco, and Emeryville, California in the Bay Area in moving the needle forward.   For some, and maybe for many, this could be a game changer.

Besides raising wages, the LA move knocks down some other barriers as well.  The wage is indexed to inflation so even after 2020, it will “keep giving” and stay up with the economic times.  There might just be a knife, or at least a pinprick, as well in the heart of the tip-regime for servers, which would be huge in changing the culture of the workplace for restaurants, coffeehouses, and similar locations.  California is one of a minority of states, eight to be exact, that do not allow a sub-minimum or tip-credit wage, so literally all boats will rise to $15, rather than just some.  The restaurants are already whining that they want to be able to add a “service charge” to help pay for the increase, and if they are successful, that will be an even deeper plunge into the heart of the servile versus service tipping culture, because the customers will get the message even more clearly that they are being asked to directly pay the wages of the restaurants’ workforce.  Only the rich and Hollywood big spenders are going to willingly agree to essentially pay twice.  This is almost as exciting as living wages!

Will it cost jobs?  Will it raise prices?  My answer would be “maybe, but….”

Most studies have established that the job loss numbers will be minimal to marginal.  In places dominated by the service industry, they can’t move, so they have to stay where the customers are.  In other lower wage jobs, like small manufacturing, warehousing, and the like, most of them have already moved out of Los Angeles into the Imperial Valley or Nevada where land costs are cheaper.  Others need to be close to the port corridor so for them it’s location, location, location as well.  The more interesting question for Los Angeles and other cities that take the plunge will be the impact on “wage compression,” as it’s called:  will wages between $9 and $15 also push up towards the $6 number in coming years in order to hold onto valuable staff that are now being paid $10, $12, or $14 and told to like it and they’re lucky not to be at $9?  This will be an important and interesting fight for labor in Los Angeles, so well worth watching.

That’s jobs, so how about pricing?  The nice thing about an area-wide increase like this one is that everyone is in the same stew, so there is no competitive disadvantage to raising prices to reflect real costs as opposed to the problem that places like our own Fair Grinds Coffeehouse face.  The fact that we are fairtrade only and therefore pay a premium for our coffee that is many multiples higher than all of our competition does not mean that we can charge the true price for a cup of coffee.  In Los Angeles, prices will rise to some level, but luckily they are rising in reaction to wages, rather than this being Buenos Aires where prices are rising and wages are stagnant.  We could all live with this and in fact the New York’s, Sydney’s, London’s, and elsewhere that prices seem sky high while people continue to stream in prove something as well.

The Lakers and Dodgers might not be all that anymore, but the Los Angeles City Council is a team worth watching and rooting for!