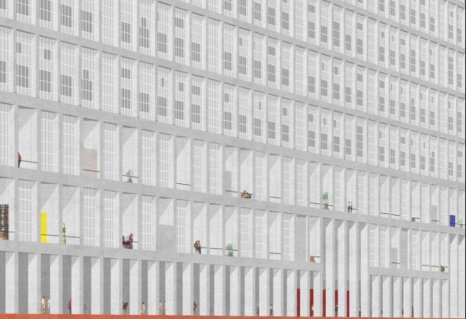 Rock Creek, Montana    Michael Robinson Cohen built a couple of coffee carts for Fair Grinds Coffeehouse that have always been particularly useful in handling the throngs at Jazz Fest and at other times. He also built the extension of the coffee bar at our Ponce de Leon location along with a couple of sandwich boards. My companera and I visited with him frequently when he and a woman we knew well ran into each other frequently during the two-day marathon showing of The Jackel several years ago. He left the city for the Yale School of Architecture, and I wouldn’t have been surprised if that might not have been the last we heard from him, and it was for years. I got a message from him out of the blue during the fall that he was part of an advanced studio underworld with renowned Italian architect, Pier Vittorio Aureli, and their project was to see if they could figure out new and innovative ways to add 100,000 units of housing in San Francisco, and not just housing, but affordable housing in the “executive” city by the Bay that is squeezing out the last of the working class with every passing month. On the fly, I connected him to Randy Shaw of the Tenderloin Housing Clinic, and wondered what might come of all of this studio speculation, if anything.

Changing planes in Denver for several hours and able to briefly access the internet, I was barely able to download this massive PDF file that ended up containing nine different, but all fascinating, notions of how 100,000 units of new housing might be shoehorned into the difficult housing regulations, sky high real estate values, and challenging topography of San Francisco. Reading through the whole Aureli Studio book in my Airstream trailer might seem a weird juxtaposition, but, ironically, might have been the perfect place to contemplate their work and this problem.

Without any of the studio ever specifically addressing the devilish details of the real dollar cost on their renderings, all were in agreement obviously that to add 100,000 units means thinking “small,” no matter how grand their vision, how soaring their language, or how erudite their historical reference points. The title of their collective enterprise, “Is Less Enough,” speaks to the troubling question unanswered.

The various schemes were a creative and detailed education in themselves for the uninitiated like myself. One plan contemplated going underground where housing regulations were nonexistent. One was of a mind to build in the median or neutral ground of thoroughfares and in the parking lane of streets. I examined that plan in detail, since I doubted I would never see anything built like it in a street in my lifetime. One jutted out on piers into the Bay, and I tried to imagine the substructure that would protect the building from an earthquake and the tsunami that might follow. Another was an eight stories high box and pictured in the middle of a neighborhood where houses came to its proposed waist, and I could almost hear the neighbors screaming to their elected officials in this city, where the 1% is king and the top quarter would be virtually one-percenters in the rest of the USA, about the loss of their sight-line and inventing new love for the “character” of their neighborhood.

Nonetheless, what was so exciting to read was the depth of the political recognition behind each detailed set of drawings. They saw themselves designing for the precariat, even if many of the tech drones themselves might be rationalizing their housing situation as temporary before they were as rich as Gates, Jobs or even better, Zuckerberg. They understood there was a new transient class and that a city that grew by 30,000 while it only added 1500 units of housing was drowning out the sounds of a new enslavement of workers in the roar of its own boosterism. It was also exciting to read so many of the young architects views on the necessity of communal and cooperative arrangements, their notions of a “core” where common functions would prevail and separate “cells” or units where residents would find private spaces, and despite their questioning about whether “less” might be “enough,” their implicit assumption that in all likelihood, it was going to have to be.

Michael’s own project was to build an adaptation of the Italian post-war palazzina or as he wrote:

Palazzina is a medium scale building that offers affordable housing for mid­dle-income freelance workers in San Francisco. Suitable to the existing den­sity of the city, the intermediate scale of the project, which sits between the townhouse and the tower enables independent inhabitants to form residential cooperatives. Limiting the size of the community supports effective sharing of space and domestic tasks, engendering a collective consciousness that is essential for the precarious worker of the disenfranchised middle-class. While the project is contextual in scale, the autonomy of the building is made evident by its cubic form and isotropic façade. The regularity of the exterior clearly marks a limit to the city and conceals the project’s unique spatial and social interior.

The palazzina also shared an understanding of co-op apartments and common space in New York City housing, where families could purchase their individual units, while sharing some common services and space.

It was a relief to read that this was not just transient housing and therefore might have more prospects of realization, given our continued love affair with home ownership and the developers resistance to speculate on building more SROs or anything with the word “transient” involved no matter how young, clean cut, and techie this new precariat might want to claim that they are. I was also pleased to see that one plan went right to the heart of redeveloping the SROs in the Tenderloin where Randy Shaw has made his career. He might not applaud every detail, but he would be happy to see that architects are thinking about ways to rehabilitate some of his 500 SROs, rather than letting them crumble to waste as some of their owners seem to intend.

Undoubtedly we need a whole lot more of the kind of thinking the Aureli Studio at Yale has done about San Francisco, and we need it to leave the ivory tower and get into the heart of the cities where we all live and work and desperately demand decent and affordable housing.