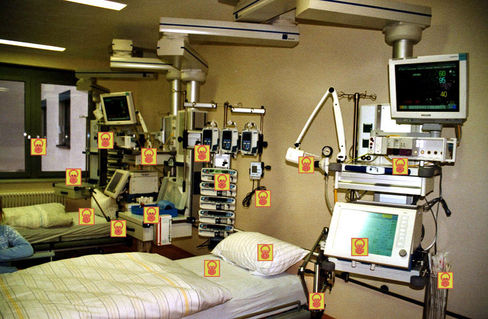 San Francisco     The Affordable Care Act has given health consumers, also known frequently as patients, more significant advances in transparency and information about hospitals and doctors. Medical records are being digitized and becoming accessible. Information is being made public on doctors, exposing some have Medicare mills. It appears the public is getting closer to being able rate and rank hospitals on cost and efficacy in handling various procedures. There’s hope we may be able to be better informed on questions that impact our own life prospects and therefore better able to make decisions and evaluate the opinions and prognosis of this powerful priesthood of doctors and the temples or hospitals where they practice.

Despite this glasnost, it was unsettling, perhaps even shocking, to read a story from the Los Angeles Times that showed light on the veil of secrecy practiced by hospitals in shielding information from the public on outbreaks of infections, whether from staph or so-called superbugs, or other seemingly inexplicable epidemics that suddenly take down otherwise healthy patients often passing through the hospital on minimal or routine visits. Worse, what we know is often only years later through tangential revelations in medical journals still disguising the names of the hospital and other critical details that might have saved lives when a stitch in time was still possible.

The Los Angeles Times told about six children having been killed suddenly in an unknown hospital due to a fungal infection that later information indicated had occurred at Children’s Hospital in Los Angeles several years before due to dust picked up from construction of an overhead sidewalk at the facility. Other examples in Florida and California caused what may be countless deaths, once again only puzzled out for the public years later, because of a design flaw in instruments that prevented complete cleaning. In another case, a doctor had inadvertently spread a staph infection into the hearts of five patients and eventually in sixty others before the health department was able to track the problem down and stamp it out. Tell me all of this isn’t scary as heck!

So, we can say that stuff happens, even bad and evil stuff, but that doesn’t excuse not warning the public as you would with other situations of public health outbreaks. The defense offered by the hospitals and some of their governmental minders is that if the hospitals were not promised confidentiality then they might not report any of the incidents to public health authorities at all, even though everyone agrees that the reporting is not comprehensive even with confidentiality. The hospitals argue that they don’t want to panic the public. The rationalizations seem unending. It’s hard to believe that this isn’t really about having to face liability and legal actions for such errors, but maybe that’s a euphemism for “panic.”

Amazingly, there seems to be virtually no legislation at the federal or state level that mandates reporting or assigns penalties for failing to report. Our legislators seem to be wittingly covering for the abuse and neglect of these priests and their sanctuaries just as we have experienced in other institution where inadequate accountability and disclosure are the rule. A law in California passed after an egregious case requiring a hospital report of how many of their patients get infections seemed a positive note, but then the mother of the victim was quoted saying that she was on the supervisory board and that 12 of the 17 members were doctors and hospitals and only wanted to protect “their employers.”

What do we do in a world where to stay healthy we have to stay away from hospitals? Public disclosure would advance public health and consumer health decisions and confidence. Why is this a hard thing to ask from our politicians?

Confessions of An Accidental Businessman By James Autry

How Overconsumption Is Killing Us- and How to Fight Back

Clear Standards for Charity Care for Nonprofit Hospitals
Little Rock    For millions there is a collective sigh of relief as 6-3 affirmation of the Affordable Care Act subsidies for low income Americans sinks in and allows us to stop pinching our arms...
Read more...

More Handles Emerging to Force Accountability for Nonprofit Hospitals
New Orleans      No matter what the Supreme Court decides this summer, there is little question that to secure more health care protection for lower income families, particularly in the...
Read more...

Welcoming Hospitality
I wrote recently on the ‘power word’ benediction, and today it’s blessing and welcoming hospitality that arise, deliciously, for reflection. In the February message from Friends of Silence, the...
Read more...

Holding Hospitals Accountable in Washington State
Little Rock        Like most people, I’m pretty sure the quality of my life is directly improved in proportion to my ability to avoid this strangely named thing called “webinars.” Surely, that’s...
Read more...

Four Ways That Diseases Over "There" Impact Us Over "Here"
Image Credit A lot of people make the mistake of assuming that poverty and disease in other nations is not our problem, after all, how can what is happening over there impact us over here? It...
Read more...

Some States Governments Step Up on Hospital Accountability
New Orleans    It took a long time before hard questions were asked of churches given the faith so many people have in them, but the process has produced important and powerful results.  Modern...
Read more...

Legislators Leveraging Hospitals to Pressure Governors to Expand Medicaid
New Orleans       In Florida, there is a well-publicized breech between the Republican Governor and the Republican-controlled legislature over their budget shortfalls and the need to bridge the...
Read more...

Duke Nuke 'Em's Disease
This clever parody of a clearly non-existent disease is hilarious and a humorous reminder of the "disease" of video game addiction. It has been viewed over 5 million times.
Read more...

6 Steps to Protect Your Organism from Infections
There exist different types of infectious diseases. They can be caused by bacteria, various viruses, and other dangerous agents. They are pretty common because they are easily spread. Nevertheless,...
Read more...