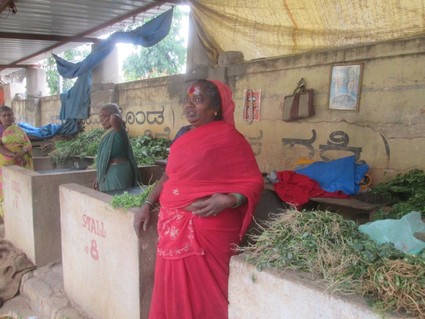 Bengaluru       There are probably 200 markets in Bengaluru, a city of 8 million, known in the West allegedly as a tech-center, the Silicon Valley of India or in the famous novel, White Tiger, as a place where any Indian can be lost forever and reinvent themselves anonymously and invisibly.  We don’t know anything about any of that.  We primarily organize hawkers and street sellers in Bengaluru where we have 15,000 members in 30 of the markets here.

Markets like Yesvantpur are divided nicely, though you might not notice it at first glance, between stalls, where various organizing victories by hawkers have led to permanent spaces bordered by iron fences allowing both livelihood and safe shopping.  In the stalls everything imaginable is sold from cooking oil to spices to clothes to small electronics to sneakers and sandals to cookware to literally whatever.

After walking down a long row of scores of stalls the demarcation is a low concrete walled composting area tended by cattle and roaming goats. Turn the corner and you are now in the vegetable market.  Large bicycle wheeled flatbed wooden carts with piled high with vegetables except for a firmly mounted scale with an aluminum bowl and weights to measure the sale.  At Yesvantpur, the most common street sellers featured onions, potatoes, garlic, and ginger.  Others had eggplant or yellow cauliflower. Some had grapes, apples, and bananas.  Small, almost softball sized heads of lettuce were featured in yet others.  The carts were lined up one after another on both sides of the street.  How one decided to stop was obviously a matter of habit and experience, since a novice would have had difficulty figuring out why a steady stream might be at one cart and no one at another even though the goods on offer seemed identical.

In the street market where we have recently won construction of a permanent market under a flyover, the variety is smaller but stunning. Hawkers of every description work there with their wares as well as others running a food court of sorts to catch the crowds coming across the railroad tracks towards the bus switching stations and the street traffic everywhere. One of our leaders was doing a brisk business in ear studs, simple silver chains, and multi-colored rubber bracelets that caught the eye.  I watched to see if the Che Guevara kerchief caught anyone’s attention and resisted the purchase myself.  The hawker kept a smile on the sell constantly, and helped clasp the chain behind the young men’s necks as they gave over their 20 rupees to cinch the deal.

Suresh Kadashan, ACORN’s organizer, pointed out one of our members, an older man who we referred to as the 100% hawker.  He had no home.  This was all of his life.  Right here on this patch.

The weekend is prime time, especially Sundays, where the crowds triple.  But, the market is a daily experience for many Indians, even in megacities like Bengaluru.  Our street sellers will usually make between 300 and 500 rupees a day.  When our hawkers, sometimes over generations, make their way to a permanent stall, they make more obviously.  When $2 per day defines the most abject poverty, a livelihood of $6 to $10 a day is a constant grind, but a big step up.  Having a union is another jump up the ladder allowing recognition, stability, and a decent livelihood.