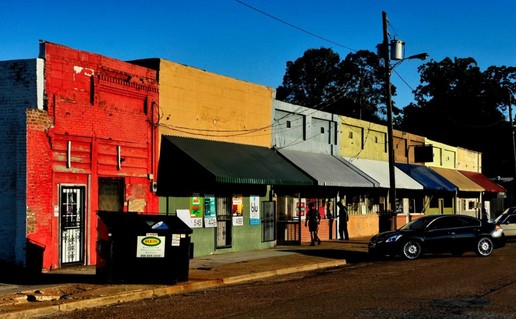 New Orleans   It was just another day for my mother, but it was her birthday, and she was now 92 years’ old, and that’s quite something in itself.

Several times during the week before she had asked me if her mother was still alive, and I would explain that she had died forty years earlier. She said she knew that. But, she wanted to know if she “could go home now.” Home was a small cotton farming down in the middle of Sunflower County in Mississippi in the rich delta land hardly thirty miles from the great Mississippi River about one-hundred miles south of Memphis and one-hundred miles north of Jackson. I would explain to her, as I had done many times before, that she no longer had family or friends in Drew. The house on Shaw Street was still there, but even though one of my uncles had refurbished it, their old family home had been sold twenty-five or thirty years earlier as she and her brothers made permanent homes in Oklahoma, Louisiana, and Missouri. New Orleans would always be her home now. There was no going back to Drew for her, I patiently explained once again. The Drew she knew no longer existed.

Turned out I was being overly kind to Drew and Sunflower County.

Coincidentally, I was going through newspapers I had missed while out of the country, and stumbled on a reprinted article in the New Orleans Times-Picayune by a Washington Post reporter named Chico Harlan that carried a Drew, Mississippi dateline. The theme was inter-generational poverty and the quicksand of despair that continued to flood the delta counties, making them among the most impoverished in the country. The reporter had followed a young man in the chaos of his high school graduation up the road from Drew in Ruleville and then on to his desperate job search and then led him to a Nashville-based job training school with a $30,000 loan and hopes of walking out as a diesel engine mechanic. I felt thankful that the story ended there, fearing that the next chapter would be even worse. Sunflower County is now the 72nd poorest county in the United States and has been experiencing steady population decline, and in fact is half the number it was in the 1950s. Drew now only claims less than 2000 people, though I swear there had been 5000 there when my family used to drive up from New Orleans for Thanksgiving every year in the late 1950s and my brother and I would spend a week there visiting my grandmother for several summers in our early teens. We would ride with my great aunt who was the Drew postmistress to deliver mail to the notorious Parchman Prison several miles up the road, our eyes big as saucers, partially because of the prison, and partially because Aunt Sue drove fast and kept two wheels on the pavement and the other two kicking up dust on the shoulder of the road the whole way.

The high school where my mother and my uncles Tom and Barton Wade graduated and where Archie Manning, NFL star and father of Peyton and Eli, was first a local football and sports phenomenon is no longer the high school, since the schools are now consolidated in Ruleville after the state took them all over as failing enterprises. We only knew Ruleville as the home of Fannie Lou Hamer and a better picture show than the one in Drew.

The one thing that is still true is that more than 70% of the town and county is African-American. The schools are virtually all black. A private academy formed in reaction to the civil rights struggles and mandatory integration now schools almost all of the whites. Todd J. Moye, author of Let the People Decide: Black Freedom and White Resistance Movements in Sunflower County, Mississippi, 1945-1986, wrote that the white residents of Drew had “traditionally been regarded as the most recalcitrant in the county on racial matters” and perhaps the worst in the state. Many arguments and admonitions underscored that memory too. The Post had a picture of drug dealing in front of an abandoned gas station that I remembered as well, claiming that economic refugees to the north in the great migration had sent their children back to relatives and brought the drugs with them. Unlikely, but simply harder to hide in a town so miserable and small now.

I found myself searching for a brighter story. There was some kind of a small economic development nonprofit located in Drew, claiming an office address on Shaw Street only blocks from where my grandparents had lived. Guidestar had no current information, but hopefully it was still at it. There were hints of one or two other efforts as well.

I found myself once again checking the distances on my monthly circuit from Texas to Arkansas to New Orleans even though I knew from earlier “roots tours” taking our own children through Drew would only add another hour or so to the journey and thinking, perhaps irrationally, that even if my mother could never go home, perhaps I could go for her and maybe, even more crazily, I could pop my head in here and there and see if there was any way to lend a hand if I had any skills to offer the Sisyphean task of Drew and Sunflower County trying to survive as something more than a shadow of their troubled past and endangered present. Never in My Wildest Dreams

A Black Woman's Life in Journalism

How to toast my late mother, mentor, and dog
Please join me in toasting the memories of my late mother, a mentor, and Gustav who’s featured in an important new book on animal transitions. All three taught me valuable lessons that you may...
Read more...

The Average White Home Boy Raps
In a prime example of the popularity of retro videos "going viral" once ripped to the web, Denny Blaze, aka The Average Homeboy, was found on a demo VHS he sent to MTV. After living in the studios...
Read more...

Every Child Deserves A Home
Gail Johnson has spent her professional life working as a children’s advocate, including twenty years finding permanent families for children who lost families through abuse or neglect. Her early...
Read more...

The Journey Home
It’s amazing how paintings and poems can speak to our hearts. I recently read the poem “Ithaka” by C. P. Cavafy and was struck by the symbolic meaning of “Ithaka.” For those of you who are...
Read more...

Home and Exile: Uprooted and Growing New Roots – May Sarton
Originally posted on Sophia's Children:Hero Awaiting the Return of Leander, 1885, by Evelyn De Morgan. “I too have known the inward disturbance of exile, The great peril of being at home nowhere,...
Read more...

I Hate My Job
When you have an "I hate my job" day try this: On your way home from work, stop at your pharmacy and go to the thermometer section. You will need to purchase a rectal thermometer made by "Q-tip."...
Read more...

Dandelions and Violets: Wild Edibles Close to Home
Originally posted on Nourishing Words:My eyes have been opened to the wild, edible greens growing right in my own yard, after attending Let Food Be Thy Medicine: Using Herbs in the Kitchen at...
Read more...

The Poignant Moments of Escorting a Soldier Home
New Orleans   As we prepared to take off from Denver on the last leg of our flight on United Airlines, the pilot came on the intercom with an announcement that fortunately I had not heard in all...
Read more...

My Grandson – The Graduate
My vision for my grandson, Evan, has always been huge. First and foremost a golf superstar. We have been golf buddies since he could barely swing a club. His vision is as far reaching as what...
Read more...

Oil Sacrifice Zone for Many is Home to Some
New Orleans       Born in Laramie and raised in and around the West as a boy, it’s still a place of my heart and a taproot to my life, so I try to keep up as I travel along my winding roads and...
Read more...