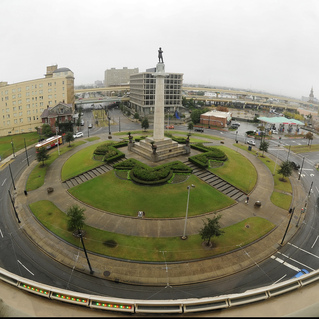 New Orleans     If you’re living anywhere in the southern United States it pays to be careful before you start tut-tuting about those crazy racists over in South Carolina about flying the Confederate battle flag over their state capitol. Just look around you, and memorials to the lost war in the South for slavery are everywhere. South Carolina can debate about taking care of their problem in the wake of the tragic hate killings in a historic and activist AME church in Charleston, but there’s work to be done throughout the South.

Writing from New Orleans, we have General Lee towering over Lee Circle in the business district as the gateway to driving down stately St. Charles Avenue. Of course there’s also a statue of Jefferson Davis along the wide stretch of Jefferson Davis Parkway in the city. A local columnist commented on two African-American friends who make a regular personal protest every full moon of going over and pissing on the statue. A public elementary school attended by my daughter was named after a hater former president of state superintendent of Louisiana schools, born in Charleston, South Carolina, who led the fight to keep the New Orleans schools lily-white in the late 1800’s as a way of maintaining white supremacy. It’s still named after him. Just saying.

And, for flags flying we have a bunch of southern states memorializing the Lost War of the Confederacy at their state capitols, on their license plates, and in everyone’s faces.

Arkansas has a big, blue star in the middle of its flag commemorating its four fun years as part of the Confederacy. The history is clear. The state legislature added the star in 1923 according to the state’s historian’s remarks to commemorate the confederacy and made sure to make it more prominent than the other three stars for the countries that had previously ruled the state. The Alabama flag is modeled on the Alabama infantry flag from the Civil War. The red cross in the Florida flag was added by a governor in memory of his enlistment in the Confederate Army in his youth. The Georgia flag is the first national flag of the Confederacy with the Georgia seal on it. Mississippi, not surprisingly, incorporates the battle flag of the Confederacy into its state flag. North Carolina and Tennessee also incorporate the old Confederate flag in state flag designs. As a blogger noted in the Washington Post,

As of the 2010 Census, these states were home to about 60 million Americans — including 12 million African-Americans, meaning roughly one third of the nation’s black population lives under a state flag that evokes, at least in the eyes of many, the Confederacy.

The message is clear and there’s no getting around it. Some might say, who cares and who even notices a state flag anymore? If that’s true, then no one will lose much sleep getting a new one. There are always museums that can hold civil war statuary and symbols, and that’s where it all belongs, not in a public place that lends legitimacy to a sordid history, rather than teaching the lessons learned over time. With time there must be change and we have to honor the new and the future, not just the past.

Paul Thurmond, a Republican state senator in South Carolina and son of Strom Thurmond, the former US Senator and arch-segregationist presidential candidate, explained that he would vote to remove the confederate battle flag from the State House. He was quoted in the New York Times saying:

Our ancestors were literally fighting to keep human beings as slaves and to continue the unimaginable acts that occur when someone is held against their will. I am not proud of this heritage.

For a change we all need to agree with a Senator Thurmond and fix this stuff now!