Activism Humor Close to the Bone 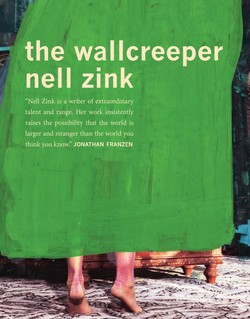 New Orleans   In recent years there seems to be a small cottage industry of novelists mining the left, activism, and the sixties, especially the flirtations with violence in their work: Dissident Gardens by Jonathan Lethem, True Believers by Kurt Andersen, and Flamethrowers by Rachel Kushner are among them. And, yes, I read them all with one eye cocked and a weird fascination at their attraction. You never know when you might learn something about the work from the popular culture outside, rather than the sub-culture inside. Unfortunately the search is also rarely rewarded.

An easier swallow was a zany novel called Wallcreeper by Nell Zink that follows a woman stumbling through life from her American roots to various cities in Europe, especially Germany. Her husband of sorts decides, somewhat surprisingly, to take his avocation about bird observation into environmental activism, and she follows somewhat obliquely. Zink’s satirical comments on the efforts to organize the group and its work are often hilarious and cut close to the bone in our modern add-water-and-stir culture of insta-groups and slacktivism.

Her husband of sorts comes to the conclusion that, “If people spent more time being disgusted, the world would be a better place. People might revolt. Like vomit.” He and a young woman activist organize a group as Zink writes, “Global Rivers Alliance was different. It was modeled on Greenpeace and the WWF. You could donate without ever being asked to do anything but donate.”

It’s not easy though because they are not alone in the fragmented mosaic of environmental activism:

“…every single person who toyed with the idea of wiring two dollars to George first felt compelled to debate the merits … with him. Most were themselves running tiny organizations that had arisen by spontaneous generation or mitosis. No one had supporters. Stephen spent hours writing closely argued defenses of himself and his aims. Each one unique, because you can’t copy anything anymore without getting caught.”

Later she writes, “They had goals, partners, approaches, and a campaign – all the things you can have without actually having done anything…” I might add that if that shoe fits, it must be painful to read.

They tire of trying to find a place in the parade and start thinking about direct action rather than fighting the air wars of publicity and the internet. Thinking of themselves that,

“…we must have been a refreshing change from activists who plan sit-ins in parks where it’s legal to sit and schedule vigils for Saturday nights. We didn’t pray for peace or play “imagine” on the autoharp. We were the real deal. Birke could man the tables at the global car wash and bake sale.”

Direct action is going to be her husband’s thing and our heroine observes:

“For Stephen, the idea of direct action was like a cross between chocolate cake and the onset of mania. ‘Frat boys in Patagucci hoisting banners and calling it sabotage,’ he mocked. ‘Calling it direct action because it goes directly to the evening news. You know their big idea for the Elbe? A raft. Like they’re really gonna make it to the North Sea against the wind. These people embarrass me. But Gernot’s tear-down-that-wall thing, that is some serious shit. Respect!”

Our heroine drifts towards the notion of direct action herself to save the Elbe River by tediously moving rocks that secure a levee against any rising water in a solitary act of personal sabotage:

“…apparently it had never crossed his mind that sabotage doesn’t look criminal if you get a young, middle-class housewife to do it. I looked like Jane Birkin in Slogan, if Slogan had been set in a scout camp in Poland. I worked the way Patty Hearst would have robbed banks if she’d never met the SLA. The militant wing of the Global Rivers Alliance radiated innocent industry. If I have one talent in the world, that’s probably it. Looking innocent enough to make whatever it is I’m doing appear legal.”

Her insight and Zink’s is disturbingly close to the narrative of life underground that emerges from Bryan Burrough’s recent book on the Weathermen and others, Days of Rage.

As the snow melts raise the river, the floods come from her action, and Zink slinks out of Wallcreeper ending with a fabricated fairy tale evolution to a different path for the heroine, but no matter, her novel was not really about organizing and activism anyway, but there were zings and stings in her writing that could serve as warnings for all of us still working on the real “real deal.”

A colleague mentioned to me recently that it is too rare that we get to tell “our own story.” True enough, and in the meantime we need to pay close attention to the way others are telling our stories.