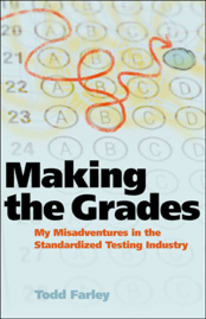 After working in standardized testing for fifteen years, Todd Farley reveals in his new book what's wrong with the industry.

Standardized testing is no laughing matter. Certainly not to the students who show up on the appointed day, alert and with No. 2 pencils in hand; nor to the educators who often help devise test questions, and devote their time helping students prepare for the exams; nor to the administrators who rely on school funding based on students’ test results.

Enter Todd Farley, a 27 year old, struggling, part-time grad student living in Iowa City, and running dangerously low on cash. When Farley accepted a job at a standardized test scoring company, after a mere four hours his first day on the job, he realized what a joke standardized testing really is.

Readers will chuckle aloud when they read Farley’s account of his inadvertent-- but long-standing-- career in the standardized testing industry in Making the Grades: My Misadventures in the Standardized Testing Industry. This memoir documents the author’s experiences in K-12 testing, and concentrates on the people who have the greatest effect on it-- most importantly scorers, those temporary employees who toil away reading student responses for low hourly wages and no benefits, and who hold a disproportionate amount of power over a student’s future.

Farley also rebukes psychometricians, the omnipotent statisticians who make decisions about students without even looking at their test answers; state education officials willing to change the way tests are scored whenever they don’t like the results; and massive, multi-national, for-profit testing companies who regularly opt for expediency and profit over the altruistic educational goals of teaching and learning.

Beneath the humor of Farley’s story lies the serious and sobering questions about the validity of large-scale assessments, the irony of the fact that the, “No Child Left Behind ‚” Act uses the phrase “scientifically-based research" more than one hundred times when discussing standardized testing, and the discovery about how the players in the industry ultimately decide the fate of students, teachers, and schools.

For anyone who has ever questioned this country’s emphasis on such large-scale assessments, Making the Grades will provide endless ammunition as to the folly of choosing tests over teachers when it comes to student learning and the state of education in the U.S.

My Misadventures in the Standardized Testing Industry

Think Like a Genius: Realizing Human Potential Though the Purposeful Play of Metaphorming By Todd Siler