The Book That Started It All: BK and the New Leadership Paradigm 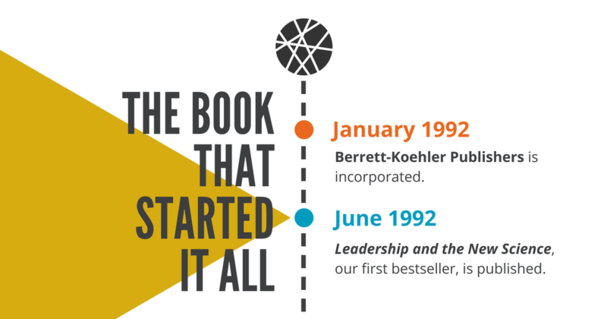 Few books published in the last 20 years have been more influential than Leadership and the New Science . It has profoundly altered people’s understanding around the world of how organizations and leadership work, including the dynamics of order and change, control and participation, structure and chaos, planning and innovation, and much more. And it has deeply influenced the work of thousands of other business and management writers, scholars, and practitioners, who have incorporated its ideas into their programs, interventions, strategies, and curricula.

When Berrett-Koehler Publishers was founded in 1992, we were blessed to publish Margaret Wheatley’s pioneering book as one of our first three books. It has had a tremendous impact on the culture and organization of our company as well as on my own thinking and leadership.

When our Editorial Director, Neal Maillet, applied several years ago to work at Berrett-Koehler, he wrote: “As a business and leadership editor whose titles frequently competed for shelf space with BK, I can only express my deep sense of admiration and, to be honest, envy, for the consistent sense of mission and values that BK titles communicate. BK books are for people who are determined to improve themselves and their organizations - not just to rely on corporatespeak or easy answers. BK titles always present a challenge and an invitation - the challenge to do the hard but rewarding work of making positive change, and the invitation to seek beyond self-gratification to community. . . . More than anything, a BK book isn’t just a product to be sold. It is invariably part of a message that is consistent across the entire organization.”

It may surprise you but publishing books with a difference-making message was not part of the original concept of Berrett-Koehler. The original concept was more mainstream, which I described as “Leading-edge publications that make new contributions to professional audiences.” But this quickly changed. The books we attracted - and the books that most interested us - were books with big, pathbreaking messages about changing individuals, organizations, and the world.

This started with Leadership and the New Science, which was one of the first three books BK published. When a former college advisor of mine sent me Meg Wheatley’s manuscript, I immediately saw that this was different from all the hundreds of books that I had worked on in my previous thirteen-year career as an editor and book marketer. The Library Journal review captured the difference: “Hold onto the top of your head when you read this book. . . Using exciting breakthroughs in biology, chemistry, and especially quantum physics, Wheatley paints a brand-new picture of business management . . . nothing less than an entirely new set of lenses through which to view our organizations.” A newspaper columnist called “The Lazy Literate” expressed the uniqueness of Meg’s work on her next book in a less flattering way: “Yikes! These folks have been eating too many avocados in their hot tubs!”

Either way, Leadership and the New Science went on to not only sell nearly 400,000 copies in 18 languages but also to profoundly influence the work of thousands of other book authors, organizational thinkers, and organizational leaders. It has won numerous awards, including being named “One of the Top Ten Business Books of All Time” by Xerox Business Services Magazine.

I hope that you will join us in spreading awareness of the wonderful contributions of this revolutionary book.

The Most Surprising Political Event of 20 Years
In honor of the 20th Anniversary Edition of When Corporations Rule the World , we discussed with David Korten the opportunities and perils of this moment in history, with regards to corporate...
Read more...