Look, Another Article On Gentrification! 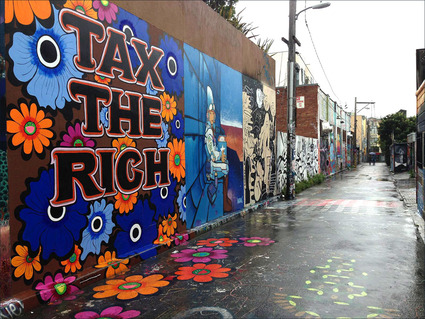 While we've established the very real and imminent consequences of gentrification, it has other ramifications that aren't limited to displacing the poor. We as a nation have a tendency to gloss over history and filter out the not-so-nice bits, as any Western world power does. It’s not only about what becomes of those evicted in the short term, but also the legacy that is left out of the grand historical narrative. There is an underlying assumption in gentrifying areas that when rich people move into poor neighborhoods, they will help their poor neighbors. At no point within our history has this proven true, if at even possible. The solution is not neighborly good feeling but rational social policy that aims to actually solve problems, not merely move them out of city centers.

What about the long term impact of a community being scattered? The process of gentrifying inner cities is tracked most closely post-deindustrialization of the late 1970s through the 1980s and into the 1990s. However, it is crucial to examine gentrification relative to the larger account of US history, as two decades later, the term is still poignantly misunderstood.

The most insidious reality that gentrification facilitates is the forced migration of those who have inherited poverty. The United States, as dictated by our history, operates under the façade of free, economic upward mobility, unrestrained by ethnicity, race, and history. Though the American Dream maintains its accessibility, the extreme disparity that we as a nation are experiencing suggests that the majority of those living within the critical mass of the 99% are currently undergoing historical erasure. More specifically, they are omitted from the story that the nation tells younger generations.

We rebuilt the cities, but at what cost? For the benefit of a back-to-the-city-movement, which can be described generally as recent college graduates in search of employment and housing inside the city limits, rather than commuting from the suburbs. The term “yuppie,” or young urban professional, coined in the late 1980s, swiftly comes to mind.

Author Chuck Collins’ outlines the dire situation that we are in, and what inequality means for the country as a whole in his book 99 to 1: How Wealth Inequality is Wrecking the World and What We Can Do About It. Inequality hurts us all, across economic and social classes. It plagues the country and misery transcends to even those in the 1%. Through Collins’ research, he found that inequality not only disenfranchises those lower on the economic ladder by siphoning votes away with the aid of lobbyists and campaign donations, it also detracts from the quality of public entities — health care, public transportation, educational institutions, state parks, and more. As these institutions are privatized, the tax dollars to maintain these public services are targeted towards the upper classes that can afford them.

Further, with greater inequality comes terrifying economic instability — does Black Tuesday of 1929 ring any bells? The Stock Market Crash prompted what was believed to be the most enduring, disruptive and treacherous decade-long depression, and it was due largely to unchecked capitalist growth and withholdings by the rich. Migration West ensued, leaving millions homeless, unemployed and lingering in breadlines.

Emerging from the Great Depression of the 1930s, we presumed, would mark the US as a world power for all eternity. Whether that was our own naiveté or we were infected with hubris (probably both), the shock of the Great Recession, which officially spans from December 2007 through June 2009, solidified housing as the landscape for economic inequality. It comes as no surprise, then, that gentrification in the present decade distresses, or more accurately infuriates, those that are evicted from their homes. Aren’t we still recovering from the burst of the housing bubble and foreclosures?

So what’s all this have to do with gentrification now? This back-to-the-city-movement is a direct opposite to White Flight and suburbanization, formally known as Spacial Deconstruction. The developing theory attempts to define the ways in which poor populations living in the city are moved and more importantly, under specific terms. In other words, Spacial Deconstruction fragments oppressed populations, tears apart communities and pushes them farther from the minds of media coverage, and the activism combatting these injustices, in turn, suffers. With the history of mass homelessness as a result of economic instability, understanding the actions of gentrifiers, evictions and the concentration of socio-economic classes in neighborhoods must be positioned within the bigger picture.

Not only does gentrification erase the history of White Flight, deindustrialization and the subsequent decay of inner cities, it simultaneously obliterates the stories of those who inhabited these city spaces for the past thirty years. The misconception of rich propriety leading to engaging the existing poor, working class communities maintains that those with money will help those who don’t. This myth, as it is absolutely a myth unsubstantiated by fact, keeps gentrification pushing forward with a juggernaut-like force.

The question remains; how can we build for the future without erasing the past? It’s undeniable that cities require constant maintenance. The crime and drug culture that has subsisted needs to be expunged and avenues for rehabilitation must be presented. There is a grave sentiment of isolation in the deepest pockets of poverty within cities, and these gentrified neighborhoods are renovating these spaces and pouring in wealth into the physical setting. Those coming in to gentrify do not necessarily possess the overt intention to displace, but rather follow the jobs, affordable housing and bohemian culture (think Brooklyn and the Mission District in San Francisco). How can we reconcile these two conflicting realities?

There are responsible and logical ways to concurrently achieve economic equality and incorporate the remaining poorer communities without being reliant on evictions and displacement. Collins’ work proved that greater equality within communities leads to financial stability for all, in health, housing, and employment. This is further embodied by the period in US history of our longest and most consistent duration of economic prosperity, specifically 1945–1977 defined as the Great Compression. During this time, the boat was raised for all with the passage of the GI Bill and Title VII of the Civil Rights Act of 1964 which instated the Equal Employment Opportunity Commission, among numerous other public works projects.

A more rigorous and comprehensive critique of gentrification and analysis of displacement is essential to tackling the issues that it poses.

We know these families are being evicted — where do they go? What assets are they leaving with? How can we avoid resegregation in cities while these families are pushed to the ghetto suburbs? Can we live alongside each other, revamp the surviving neighborhoods and build for the future?

Employing locally, lobbying for tax breaks for those who need them, and repudiating the longstanding and outdated housing covenants that coral those in similar economic classes allows for a coexistence that guides us towards equality that works for everyone. It’s a proven fact.

We are at a point of breaking free from the convention of history to secure a more equal future. Placing contemporary gentrification within the context of the overall history of the US opens the discussion for building for our future responsibly. Long-term community planning provides potential to attain financial security and respect for diverse races and ethnicities. Asking these questions is only the beginning.

What Works When Traditional Approaches Fail

Creating a World That Works for All By Sharif Abdullah