Why Showing and Asking is Better than Telling and Selling

Sam Horn, the Intrigue Expert, is a positioning/ messaging/branding strategist with a twenty-year track record of results. 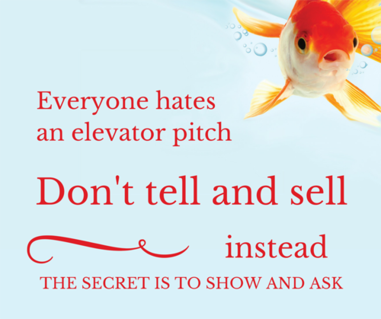 An interview with Sam Horn.

Can you please explain to readers why you published this book?

I had the privilege of being the Executive Director of the world-renowned Maui Writer’s Conference, and I saw hundreds of dreams go down the drain. People from around the world had face-to-face opportunities to meet with decision makers who had the power to give them a deal on the spot, but they didn’t know how to quickly, clearly and compellingly communicate the value of their project in a way those decision makers got it and wanted it.

So, I developed this step-by-step INTRIGUE recipe for connecting with anyone, anywhere, anytime. It’s been enormously rewarding to hear from readers that they are getting support for their ideas and projects, funding for their start-ups and causes, and “yes’s” to their dreams.

What is your favorite chapter in the book and why?

When I read Harvard business researcher Nancy F. Koehn’s report that GOLDFISH have longer attention spans than we humans do, (nine seconds to our eight), I knew I needed to create new ways to quickly capture busy, distracted, impatient people’s favorable attention.

That’s why the first section of the book, “Craft Intros that have People at Hello,” is my favorite. As Terry Jones, founder of Travelocity and endorser of Got Your Attention says, “If you can’t get people’s attention, you’ll never get their business.”

The original techniques in this section have helped people win millions in contracts, get featured on national media, and deliver riveting TED talks that scaled their influence and impact. They even helped my son Tom land his dream job at NASA’s Mission Control in Houston.

How do you coach people from other countries for whom English might be a second language? Is there a phrase that works in every language?

I just returned from South Korea where I had the honor of speaking at the 2015 Asian Leadership Conference, along with Prime Minister Modi of India, President Park Geun-hye and Jack Ma of Alibaba. What I discovered is that these INTRIGUE techniques transcend cultures.

Why? Everyone, regardless of what country they live in, wants to know how to quickly get across the value, urgency and relevancy of what they care about so other people care about it too. And one of the best ways to do that is to start with the question “Did you know … ?” and introduce some startling statistic, research finding, report or insight the other person isn’t aware of.

You just created curiosity and earned their interest by turning a monologue into a dialogue.

In your book you say we should never again give an elevator speech. Why do you recommend that?

Do you know anyone who likes to listen to a speech? From now on, when someone asks, “What to you do?” - don’t tell them! Instead, ask a three part question that gives them a chance to express how they’re familiar with, or have used/benefitted from, your product or service.

Instead, ask “Do you know a child – could be in your family, neighborhood or school - that is in a wheelchair or is dealing with a disability?” They may say, “My nephew injured his neck in a pool accident. He’s now in a wheelchair.”

Now, link what you do to what they just said. “Well I work for a non-profit that helps children like your nephew get off the sidelines up and up on water-skis, horses and into sports.”

Isn’t that a better answer? Isn’t that person more likely to relate to what you do, remember what you do and may even recommend what you do to his or her nephew? That’s why it’s in everyone’s best interests to turn elevator speeches into elevator connections.

In your book, you suggest, “Don’t Tell and Sell, Show and Ask.” What do you mean by that?

As a judge for the Dolphin Tank (Springboard Enterprises’ kinder version of the Shark Tank). I reviewed a business plan for a hook you put in your car to hang your purse on.

I thought “Really?!” Cari Carter was so smart though. She brought a full size car seat to the convention center, hauled it up to the front of the room, and started her sales presentation with her hands on an imaginary steering wheel.

She asked, “Have you ever been driving along; you had to stop all of a sudden and your purse and cell phone fell off the seat? You’re driving along with one hand while rummaging under the seat with your other hand? Imagine never doing that again.”

At that point, a man in the audience stood up and yelled, “I’ll take two! One for my wife and one for my daughter!” That’s the power of using a prop to SHOW a situation people have experienced before; while ASKING “Have you ever… ?” questions. This puts people in the scene, causes them to think “Been there, done that; don’t want it to happen again” and they voluntarily decide they want your solution to that problem.

- - - - - - - - -
Sam Horn, Intrigue Expert and author of POP!, Tongue Fu! and Got Your Attention?, is a communications strategist who helps such clients as Cisco, ASAE, Boeing, InfoComm and NASA communicate more clearly, compellingly and convincingly. www.SamHorn.com

How to Create Intrigue and Connect With Anyone