The Rise and Rise of the B Corp Movement

Ryan Honeyman is a sustainability consultant, executive coach, keynote speaker, and author of The B Corp Handbook: How to Use Business as a Force for Good (Berrett-Koehler Publishers, October 2014), the world’s first book on B Corporations. 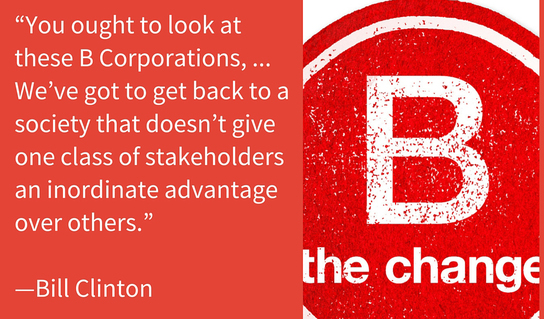 The B Corp Handbook, along with other entrepreneurship books, is 50% off until October 5th!  Check out the sale here.

The B Corporation movement has come a long way since the founding of B Lab (the nonprofit behind the B Corps) in 2007. Well-known companies such as Ben & Jerry’s, Dansko, Etsy, Method, New Belgium Brewery, Patagonia, Plum Organics, and Seventh Generation are just a few of the more than 1,300 Certified B Corporations (distinct from benefit corporations) now established across 120 industries and 43 countries, including Afghanistan, Australia, Brazil, Chile, Kenya, and Mongolia.

Inc. magazine has called B Corp certification “the highest standard for socially responsible businesses”; the New York Times has said, “B Corp provides what is lacking elsewhere: proof”; and thought leaders have expressed great interest:

“You ought to look at these B Corporations, ... We’ve got to get back to a society that doesn’t give one class of stakeholders an inordinate advantage over others.”—Bill Clinton, former president of the United States

“I think B Corporations will make more profits than other types of companies.”—Robert Shiller, 2013 Nobel laureate in Economics

“B Corporations are a way to transcend the contradictions between the ineffective parts of the social sector and myopic capitalism.”—David Brooks, columnist

But apart from all of the praise and promise, the question remains: Has the B Corp movement made a difference? In particular, has it helped companies create more social, environmental, and financial value?

I believe it has—particularly in the following five areas:

1.  Attracting talent and engaging employees. Becoming a Certified B Corporation can unleash the passion, initiative, and imagination of employees by connecting them with the larger purpose behind their work. Ryan Martens, founder and CTO of Rally Software (the first publicly traded Certified B Corporation) says that certification has made a “huge difference” to Rally’s 530 employees: “Our B Corp certification gives us a way to differentiate ourselves from Google or the latest tech startup in a marketplace that has negative unemployment.”

2.  Increasing consumer trust.  Consumers increasingly assert that they do not want to buy a green product from a company that has a poor overall social and environmental record. They want to know what kind of company stands behind the product or service they want to buy. Many B Corporations have said that certification has helped them build a deeper, more loyal fan base. For example, Neil Grimmer, cofounder and CEO of Plum Organics, says, “B Corp certification—and the rigorous standards and third-party verification that the logo represents—helps us communicate our story, our mission, and our values in a way that our consumers understand and can trust.”

3.  Benchmarking and improving performance. One of the most useful tools created by B Lab is the B Impact Assessment, a free tool that measures the social and environmental performance of an entire company on a scale of 0 to 200 points. Jostein Solheim, CEO of Ben & Jerry’s, explains that the assessment has helped the company take its performance to another level, saying, “The B Impact Assessment helps us measure, compare, and optimize multiple variables in order to deliver a better result for society and the environment.”

5. Building collective voice: Many movements—including clean tech, microfinance, and sustainable agriculture, as well as Buy Local and co-ops—are manifestations of the same idea: how to use business for good. The B Corporation amplifies the voice of this diverse marketplace through the power of a unifying brand. “When I was helping large companies with sustainability 20 years ago, the advice and support was much more piecemeal, “ says Dave Stangis, vice president of public affairs and corporate responsibility at Campbell Soup Company. “The B Corporation provides a symbol for businesses, employees, the media, community members, and environmental groups to rally around.”

So what does success for the B Corp movement look like?

In a very short amount of time, the B Corporation movement has brought together a global community of innovative, passionate, and forward-thinking business leaders who are committed to solving some of the world’s greatest social and environmental challenges. But while Marc Gunther, editor at large Guardian Sustainable Business, believes that B Lab’s accomplishments over the past seven years are very impressive and deserve praise, he says, “I’m not sure that many Fortune 500 executives are talking about B Corporations.”

Gunther touches on a point that many in the B Corp movement have realized: Success for the movement is not necessarily rapid growth in the number of Certified B Corporations. Even if there were 100,000 Certified B Corps, they would represent only a small percentage of the total number of businesses worldwide.

A more valuable measurement of success, and perhaps the true legacy of the B Corp movement, would be a dramatic increase in the number of businesses that measure what matters—social and environmental performance, in addition to financial performance—by using credible, whole-business benchmarking tools such as the B Impact Assessment. When businesses measure the effects of their operations on all of their stakeholders, compare themselves with their industry peers, and start to compete to be the best for the world rather than just the best in the world, we will be making progress toward a shared and durable prosperity for all.

The B Corp Handbook

When CSR Branding Goes Bad
Branding coal as "sexy" was not really the brightest move GE made. No wonder this ad got yanked off the airwaves quickly.
Read more...

Five Tips for Getting Involved in Corporate Responsibility
Check out Tim's book Author and self-professed treehugger Tim Mohin has been promoting sustainable practices in large corporations for most of his career. He knows that many others...
Read more...