Eight Reasons Why B Corps Are Superior

Ryan Honeyman is a sustainability consultant, executive coach, keynote speaker, and author of The B Corp Handbook: How to Use Business as a Force for Good (Berrett-Koehler Publishers, October 2014), the world’s first book on B Corporations. 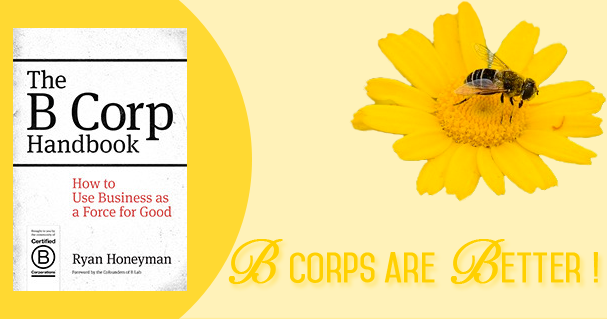 The B Corp Handbook lays out the plan for how anyone can create a better company that serves everyone (and the environment) with the highest levels of ethics and integrity -- a recipe for true profitability in every sense for every entity.

But what makes B Corps better than even other sustainability-touting businesses? Extensive research across the world into B Corp practices (and requirements) resulted in the following eight findings which prove the benefits that B Corps create for their communities and themselves over other such businesses:

2. More than half (55%) of all B Corps are more likely to cover at least a part of their employees' health insurance plans.

3. One-site renewable energy is more likely to be used by 47% of all B Corps.

4. B Corps are 45% more likely to give bonuses to non-executive employees.

5. B Corps favor suppliers from low-income communities and 18% of them are more likely to use such suppliers.

6.  Women and minorities are 28% more likely to be in management positions in B Corps.

7.  B Corps are four times more likely to afford professional development opportunities for their employees.

8. B Corps are over twice as likely to give employees at least 20 hours per year paid time off to volunteer in their communities.Keep in mind that these differentiations are not between B Corps and "regular" companies, but B Corps and other businesses that self-identify as sustainable or socially conscious. It's a higher standard within the higher standard.