Robert E. Quinn holds the Margaret Elliot Tracey Collegiate Professorship at the University of Michigan and serves on the faculty of Organization and Management at the Ross Business School. He is one of the co-founders and the current faculty co-director of the Center for Positive Organizations. 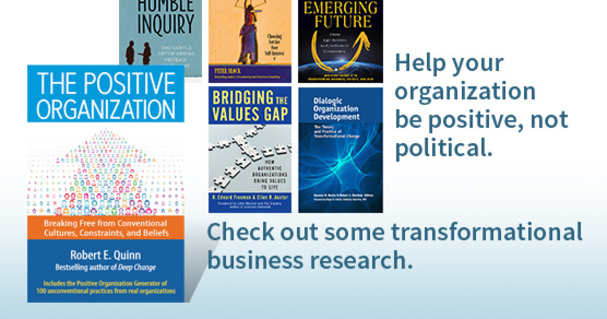 The following is an excerpt from Chapter 6 of The Positive Organization.

“Did you know that organizations are political?”

When this question is posed to a class of executives the response is usually a low laugh. The laugh signifies that the question surfaces something so obvious that it is silly. “Everyone knows that organizations are political, if you did not know this you would not survive.”

There is a follow-on question. “Have you ever had a boss who chose his or her personal good over the collective good?”

Usually every hand goes up. I then ask, “How did you react when the boss made the self-interested decision?”

The most typical answer is, “I lost respect, I stopped caring and I withdrew.”

The conventional mental map assumes that people are self-interested. The positive mental map assumes that people can be enticed to pursue the collective interest. When the assumption is realized the organization turns positive. My desire is to move people from the natural pursuit of self-interest to the unnatural pursuit of the collective good. Given this desire, I teach an elusive concept. An organization is not only a political system it is also a moral system.

The word moral means ethical, principled, honorable, honest, or good. In organizations the word can make people uncomfortable. It seems like a word that is more suited to a church room then a boardroom. After all the essence of business is competition, the survival of the fittest.

I was listening to a talk by a marriage counselor. The speaker described the positive feelings that two people tend to have when they first marry. Then he described emergent patterns of resentment, disengagement and isolation. He described people living together in cold civility while emotionally alienated. He then spoke of divorce. He indicated that most of the failed marriages could have been saved if the people knew how to relate to each other more effectively.
I was struck by how perfectly this description fits organizations. Over time people tend to become resentful, disengaged and isolated. Since no one knows what to do about it, the conflict lingers beneath the surface and people live in cold civility.

A question for our readers-- have you ever worked in an organization where conflict lingered below the surface?  What did you do about it?  Were you able to do anything about it?  Share your story with us in the comments.

For well-researched solutions on creating more positive organizations, check out our book below.  It will show you how to create a more positive mental map for your organization, one that moves beyond the assumptions of self-interest and fear.