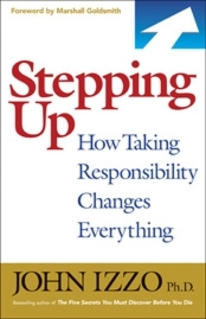 A Corporate Success Story from Stepping Up (Berrett-Koehler, 2012)

How stepping up can change everything (pg 13-15)

Responsibility changes everything. The moment we decide that we are the ones who are capable of and responsible to change things, everything shifts. This is a book about how your marriage, your career, your life, your company and our world gets better whenever each of us simply decides to step up and do what we can do in our sphere of influence.

Seeing ourselves as responsible and powerful to change things is a game changer in the deepest sense. The shift is akin to the childhood game of Tag. When I was a child growing up in New York City we played endless hours of this game. One person was “It” and had to run around trying to tag someone else. The moment you were tagged, the whole game changed.

Well you are “It”! You are responsible for your own happiness, for the success of your relationships, for the morale of your workplace, for the success of the company where you work, and for your life. What’s more you are responsible for poverty, for global warming, for your neighborhood, for your school, and for homelessness. Better said, we are all “It”. That is, when each of us takes responsibility, stepping up to do what we can, everything gets better. Not only that, but when we step up and take responsibility the game of life and work is more fun, more rewarding and we find more success.

One of the simplest yet most profound experiences of my life happened to me on an airplane in January, 2002. It was an icy snowy day in Cleveland and I arrived late for a flight just in time to be the last one on the plane before they closed the door. It did not take long for me to realize that everyone around me was in a foul mood. No sooner had I sat down when the stranger next to me turned to me saying “my boss is such an idiot-he is sending me up here to this God forsaken place. They never buy anything, they never will buy anything. He is such an idiot. ” Having overheard her diatribe, the man across the aisle chimed in with his own commentary: “Not only is your boss an idiot lady, the people who run this airline, they are idiots too. We have no leg room, we are late as always, and look at the ice on these wings, we’re probably going to die on this thing.”

Once we took off, the mood continued and the negative virus spread. Pretty soon everyone around me was complaining about the world, their companies, their spouses, and it just kept getting worse. Even I was calling my boss an idiot and I work for myself! It was a veritable feast of negativity and victim thinking and like all feasts of junk food, whether for the stomach or mind, the feast felt good going down but left all of us feeling worse.

Now about five rows in front of me, at the bulkhead, there was a mother and her two year old son. All through the first half hour of the flight, the young kid kept trying to get his head above the seat to look back but to no avail. A few times I saw his head, another time his eyebrows, but it was not until about forty minutes into the flight that he finally got his head above the seat and rested his chin and hands on the seat. He looked something like a chipmunk!

When he saw all of us behind him, he smiled the biggest, most natural smile you’ve ever seen. Within moments, that little kid transformed the five rows behind him. The “boss is an idiot lady" started talking to me about her kids. The “airline is run by idiots guy” stopped complaining and was making faces at the kid trying to get him to smile again. Someone said “we should all be a little more positive like that kid” and suggested I go borrow him. His mother gladly accepted the break and on his visit back in row six, the mood changed within minutes.

Sitting there at 30,000 feet rattling across the Midwest, I had an epiphany which I have come to call The Five Rows Principle.

What I realized is that most of us have tremendous power to influence about five rows around us but we spend most of our time thinking about, and talking about, what someone else should do in some other plane or row. What’s more, almost, every problem we face-from global warming and terrorism to poor morale or service in a company, to bullying in schools, is a five row problem. That is, the problem is merely the aggregate of what each of us is doing in our five rows.