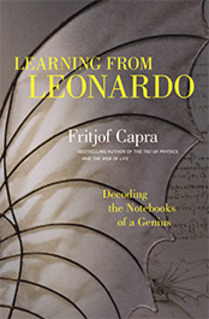 Learning from Leonardo:
Decoding the Notebooks of a Genius

“Fritjof Capra paints a vivid and compelling picture of one of the greatest geniuses in history, Leonardo Da Vinci, by skillfully weaving together all the different strands of Leonardo's master works and finally revealing the true power and breathtaking scope of his life.”

- Michio Kaku, bestselling author of Hyperspace and professor of Theoretical Physics at the Graduate Center of the City University of New York

In Learning from Leonardo , Capra outlines seven key characteristics of da Vinci’s genius and more than forty innovations Leonardo made that weren’t rediscovered until centuries later. Capra provides an overview of Leonardo’s massive contributions to a variety of fields, from aerodynamics to embryology.

Leonardo da Vinci saw the world as a dynamic, integrated whole, so he always applied concepts from one area to illuminate problems in another. For example, his studies of the movement of water informed his ideas about how landscapes are shaped, how sap rises in plants, how air moves over a bird’s wing, and how blood flows in the human body. His observations of nature enhanced his art, his drawings were integral to his scientific studies, and he brought art and science together in his extraordinarily beautiful and elegant mechanical and architectural designs.

With Learning from Leonardo , professor Capra shows that by exploring the mind of the preeminent Renaissance genius, we can gain profound insights into how best to address the challenges of the 21st century.

Fritjof Capra, PhD, physicist and systems theorist, is a founding director of the center for Ecoliteracy in Berkeley, California, which advances sustainability schooling. Dr. Capra is on the faculty of the Beahrs Environmental Leadership Program of the University of California, Berkeley, and also teaches at Schumacher College, an international center for ecological studies in England.

Decoding the Notebooks of a Genius

The Ecology of Law

Toward a Legal System in Tune with Nature and Community