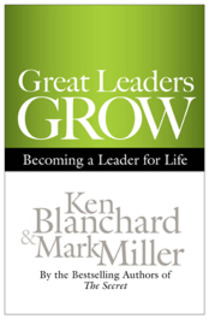 New Book by Authors of THE SECRET Helps Leaders Grow

Truly great leaders are never stagnant but strive to grow, both personally and professionally. The capacity to adapt, learn, and evolve determines a leader's ability to lead effectively, maximize their full potential, and compete with the increasing job competition in today’s economy.

The top-selling author team Ken Blanchard and Mark Miller are back with their new book GREAT LEADERS GROW (Berrett-Koehler; January 2012; $22.95; hardcover; ISBN 978-1-60994-303-5). This book is a continuation of the best-selling THE SECRET: WHAT GREAT LEADERS DO AND KNOW (Berrett-Koehler, 2004). They pick up where they left off with the development of Debbie Brewster, who has now become an accomplished leader. Having grown from mentee to mentor, Debbie now guides her former mentor’s son, Blake, through the process of growing as a leader. Debbie believes that “every leader is a learner,” and sets out to teach Blake the process of GROW.

Debbie emphasizes how learning is a necessity for leadership; it energizes, invigorates, and renews leaders by constantly challenging them to push and overcome their limits. GROW is an acronym the authors created to describe the pillars of growing as a leader: Gain knowledge, Reach out to others, Open your world, and Walk through wisdom.

During the process of growing, Blake gets off to a rocky start with his boss and starts his job during a slump in sales that puts pressure on him and the rest of the company to perform and produce results quickly. Instead of buckling under the pressure, Blake learns all he can about his company, his coworkers, and their competitors. By listening to Debbie’s lessons, he is successfully able rise to the occasion. Blake’s suggestions eventually save the company, lead to a better relationship with his boss and coworkers, and earn him a promotion to apply GROW as a company-wide strategy to improve leadership and efficiency.

After reading and implementing the lessons in GREAT LEADERS GROW, readers will be able to become leaders in their personal and professional lives. Readers will understand how to accomplish more than they thought possible and inspire others to do the same. GREAT LEADERS GROW teaches that leadership is not merely a reflection of a title or position, but anyone at any job can achieve by way of living and thinking. As Debbie says‚“If you ever think you’re finished growing as a leader, you are finished as a leader.”

Dr. Ken Blanchard is the author of numerous best-selling books, including The Secret (Berrett-Koehler, 2004), and Full Steam Ahead! (Berrett-Koehler, 2011). Blanchard is one of the most influential leadership experts in the world and is respected for his years of groundbreaking work in the fields of leadership and management. He is the cofounder and currently the Chief Spiritual Officer of the Ken Blanchard Companies, an international management training and consulting company.

Mark Miller is the author of The Secret (Berrett-Koehler, 2004) and The Secret of Teams (Berrett-Koehler, 2011). Miller has grown from an hourly worker at Chick-fil-A to the Vice President of Training and Development. He has taught for numerous international organizations over the years in leadership, creativity, team building, and more.

By Ken Blanchard and Mark Miller

The 3 Keys to Empowerment

Release the Power Within People for Astonishing Results

Look and Feel Better Once and for All