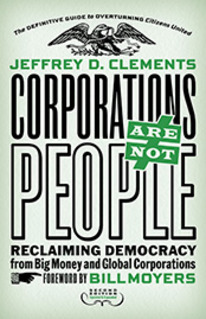 and What Citizens Can Do About It

“The Supreme Court has given a green light to a new stampede of special interest money in our politics. It is a major victory for big oil, Wall Street banks, health insurance companies and the other powerful interests that marshal their power every day in Washington to drown out the voices of everyday Americans.”  - President Barack Obama

San Francisco, CA - In 2010, the Supreme Court made a landmark decision ruling that corporations are people and thus entitled to the same rights, but not limitations, as Americans. The pivotal case of Citizens United v. Federal Election Commission allowed corporations to have unparalleled influence in government by being able to contribute an unlimited amount of money on independent expenditures for political campaigns, thus creating an America led by the big industries rather than by the American people.

In CORPORATIONS ARE NOT PEOPLE (Berrett-Koehler, $17.95; paperback; ISBN: 978-1-60994105-5, January 2012), author Jeffrey D. Clements urges the American people to reclaim their democracy from corporations. He rallies Americans to recognize this injustice and to mobilize a massive grassroots movement to fight back. It is within the ability of citizens to take back power from corporations - but Americans must be united and act swiftly.

Clements speaks of his efforts to overturn Citizens United through a nonpartisan organization, Free Speech for People, and by the passage of the People’s Rights Amendment, which he calls “the best hope to save democracy.” Citizens United v. FEC is a symbol of the corporate takeover that has been happening under Americans’ noses for decades. But enough is enough, as the Occupy Wall Street movement so dramatically demonstrates. “This is not a partisan issue,” says Clements, “but a moral one of restoring the democratic principles on which America was built.”

CORPORATIONS ARE NOT PEOPLE uncovers how this decision and the corporate takeover has directly affected Americans’ well being from massive job outsourcing to wage stagnation, the endless wars to secure energy resources and the out-of-control health care spending. The most crucial consequence of this decision is the fact that democratic ideals are falling to the wayside in favor of an ever-expanding power of corporations in government. Corporations are given tax breaks and free speech rights, but instead of using their power to boost the economy and help America, they outsource jobs and focus on increasing their greedy ambitions for more money and power.

Jeff Clements uncovers the roots, expansion, and consequence of Citizens United v. FEC and shows how it defies centuries of legal rulings in American history. In the face of the surmounting danger, he offers Americans a solution to this devastating problem: a constitutional amendment to overturn the Supreme Court decision and secure the people’s rights once again.

Citizens United, a not-for-profit corporation organized under Virginia law and founded by David Bossie, produced a political documentary, Hillary: The Movie, which criticized Hillary Clinton during the 2008 Democratic primary campaign.

However, the non-profit corporation proposed to finance, advertise and distribute the movie using corporate funding - a violation of the restriction on corporate-funded'electioneering communications’ in 30- and 60-day windows before an election. Restrictions on election spending by corporations go back to 1912, and the 2002 McCain-Feingold Bipartisan Campaign Reform Act applied that corporate restriction to “independent expenditures” to support or oppose a candidate (“independent expenditures” refer to electioneering communications that are not directly coordinated with a candidate’s campaign). Before the 2008 presidential primary season, the Citizens United organization sued the Federal Election Committee to block the law, then appealed to the Supreme Court.

On January 20, 2010, the Court ruled in favor of corporations, equating corporations with people and corporate election spending with “speech” and “voices”. According to Justice Kennedy, writing for the 5-4 majority on the Court, corporations “speak” by spending money and thus it would be violating their free speech rights under the First Amendment to place any limitations on their contributions. The Court did not limit its decision to non-profit corporations such as Citizens United, but opened the way for any corporation, from Exxon to Goldman Sachs or any other corporation, to use massive amounts of money in order to control elections. As a result, elections will no longer be a reflection of the will of the American people but of the corporations and the 1%.

Jeff Clements is the cofounder and general counsel for Free Speech for People, a national nonpartisan campaign. He worked as an Assistant Attorney General in Massachusetts from 1996 to 2000. During this time, he helped recover billions of dollars for Massachusetts, fought to end unlawful and deceitful practices by the tobacco industry, and directed investigations and prosecutions of the Massachusetts’ antitrust and trade practice laws. Clements also served as Chief of the Public Protection and Advocacy Bureau from 2007 to 2009 where he led 100 plus attorneys and staff to actively protect civil rights, healthcare, consumer protection, and environmental protection.

Clements also founded the Clements Law Office, LLC and has been representing people, businesses and public interest since 1988.

Realizing the Market Value of Leadership