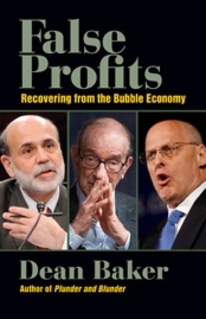 
BEN BERNANKE IS TIME MAGAZINE’S MAN OF THE YEAR?

Dean Baker Is Shocked by the Choice; His New Book Reveals Why

According to Dean Baker, co-director of the Center for Economic and Policy Research, Ben Bernanke, along with the Federal Reserve under Alan Greenspan, missed the crisis brewing in the housing market. Although sub-prime and Alt-A loans were a problem, the most important aspect of the recent collapse of the financial system was the eight trillion dollar housing bubble. Baker believes that the Federal Reserve Board’s failure to stop the growth of the housing bubble was the single most consequential economic error in the history of the world.

Although the people who looked the other way as the bubble grew unchecked are trying to rewrite history, Baker sets the record straight in his new book False Profits: Recovering from the Bubble Economy (Berrett-Koehler Publishers, January 15, 2010).

In False Profits, Baker recounts the strategies used by the country’s top economic policymakers to keep the American public unaware of their failure to recognize the housing bubble and to take steps to rein it in before it grew to unprecedented levels, resulting in the loss of millions of jobs, homes, and the life savings of tens of millions of people.

Those responsible continue to shroud the issue in complexity as a way of confusing the American public; they deflect blame saying that the problems were so complicated that no one could have foreseen them. Dean Baker warned us the collapse was coming, and says that any good economics student would have been able to predict the train wreck well before it happened.

In terms of recovery, Baker reveals exactly why real stimulus is necessary in a recession. He quashes dire warnings of looming rampant inflation and spiraling debt with solid historic evidence to the contrary - evidence in support of more stimulus. He reveals the evolving role of the U.S. dollar in today’s global economy and lays down cogent arguments about why the dollar will fall in value.

With a dose of optimism, Baker outlines new reforms, advocating for a thoughtful progressive program for rebuilding the economy and reshaping the financial system. His first reform is the Fed. He goes on to propose new financial transaction taxes that will reduce or eliminate economic waste while providing stimulus and incentives where and when they are most needed. And, he believes that it’s time for the people who are responsible for the recession to be held accountable.

Dean Baker is the co-director of the Center for Economic and Policy Research in Washington DC. He is the author of several books, including Plunder and Blunder: The Rise and Fall of the Bubble Economy and The Conservative Nanny State: How the Wealthy Use the Government to Stay Rich and Get Richer. In addition to writing a weekly column for The American Prospect, he also appears frequently on TV and radio programs including CNN, CBS News, PBS’s NewsHour, and National Public Radio.