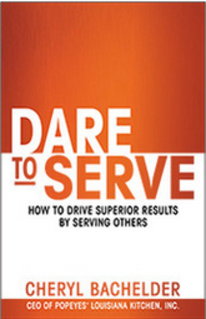 Cheryl Bachelder tells how she and her team engineered the extraordinary turnaround of Popeyes Louisiana Kitchen by making a tough but rewarding decision to lead through service.

“Extraordinary! Dare to Serve describes the kind of leadership so desperately needed in the 21st century. A powerful blend of courage and humility, Cheryl Bachelder’s engaging story offers a clear path for leaders to follow, and what makes her message so compelling is the tremendous results she’s produced. I highly recommend this book.” —Stephen M. R. Covey, #1 bestselling author of The Speed of Trust and coauthor of Smart Trust

Cheryl Bachelder joined an ailing restaurant chain and turned it into the darling of the industry— by daring to serve the people in her organization well. When Bachelder was named CEO of Popeyesin the fall of 2007, guest visits had been declining for years, restaurant sales and profit trends were negative, and the company stock price had dropped from $34 in 2002 to $13. The brand was stagnant, and relations between the company and its franchise owners were strained.

By 2014, average restaurant sales were up 25 percent, and profits were up 40 percent. Popeyes’ market share had grown from 14 percent to 21 percent, and the stock price was over $40. The franchisees were so pleased with the turnaround that they began reinvesting in the brand, rapidly remodeling restaurants, and building new units around the world.

The difference maker, Bachelder says, was a conscious decision to lead in a new way. She and her team created a workplace where people were treated with respect and dignity yet challenged to perform at the highest level. Silos and self were set aside in favor of collaboration and team play. And the results were measured with rigor and discipline. Servant leadership is sometimes derided as soft or ineffective, but this book shows that it’s actually challenging and tough minded—a daring path. Bachelder takes you firsthand through the transformation of Popeyes and shows how a leader at any level can become a Dare-to-Serve leader.

Cheryl Bachelder is the CEO of Popeyes® Louisiana Kitchen, Inc. a multibillion-dollar chain of more than 2,200 restaurants around the world. She has been profiled in the Wall Street Journal and the New York Times and was recently named by CNBC’s Jim Cramer as one of his “21 Bankable CEOs” for 2014. In 2012, she was recognized as Leader of the Year by the Women’s Foodservice Forum and received the industry’s highest award, the Silver Plate Award, from the International Foodservice Manufacturers Association. Cheryl has enjoyed thirty-five years of leadership at Yum! Brands, Domino’s Pizza, RJR Nabisco, the Gillette Company, and Procter & Gamble. She serves on the board of Pier 1 Imports.

How to Drive Superior Results by Serving Others

How to Drive Superior Results by Serving Others