Is Your Book Proposal Voice Like Nails on a Chalkboard?

Neal Maillet has worked in book publishing for more than 25 years, and is responsible for acquiring and editing roughly half the titles BK publishes each year. 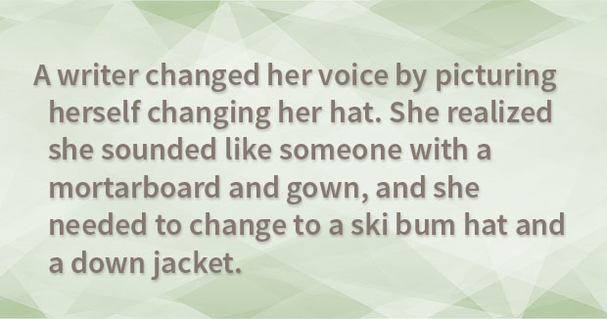 Is your voice cracking?

Authors are sometimes confused when I tell them their “voice” isn’t working. I’m not sure I always know what I mean by this myself, and it’s one of those “you know it when you see/hear it” kinds of criticisms. “Voice” is a word to describe your conversational tone with the reader. Are you reproachful? Comedic? Authoritative? Academic? Profane? The possibilities are endless, but I'm only likely to notice your voice when it’s cracking.

Voice will often trip up the beginning or awkward writer, yet the experienced or natural writer will rarely think of it. This is a little like the paradox of not being able to find jobs requiring experience because nobody will give you experience. Unfortunately, your lack of a strong voice is probably obvious to everyone who already has one.

So how do you get a good writing voice?
My advice to writers, especially new ones, is to pretend a friendly coworker is sitting across the desk from you and to speak out, yes, out loud, your sentences. This is the best way to tell if your voice is annoying or off the rails. Do you sound preachy, forced, or like some dusty textbook? Or do you sound like a real human being you’d readily grab a chair to sit down next to? (Note the dangling participle in the preceding sentence-yeah, I could have fixed that with a “to whom you’d readily…” but that would have ruined my voice, get it? I’d much rather keep a friend than lose a dangling participle any day.)

True story: I recently talked about this with an author, who told me she changed her voice by picturing herself changing her hat. She realized she sounded like someone with a mortarboard and gown, and she needed to change to a ski bum hat and a down jacket. She was a blast to read after that!

Common voice problems in book proposals
The most common voice problems we see in book proposals are 1. the improper use of “we”-i.e. encompassing the reader in the royal “we” along with “me,” the writer-and 2. writing like a professor rather than a student. In the first case, the writer is presuming to bond with the reader before asking to hold hands or even have a coffee together. It’s kind of smarmy and presumptuous, in my opinion, to write about a topic as if “we” all know exactly what to believe, don’t we? Surely the writer must show a little more respect for boundaries?

In the second case, I maintain that it’s much smarter and far more clever to write at the 6th-grade level than to write like a postgrad. If you’re trying to wow me with jargon and complicated multisyllabic words, you may be covering up poor thinking with complicated verbal machinery. I’m often amazed at the run-on sentences and indecipherable clauses in proposals that try to impress me rather than speak to me honestly and clearly. C’mon writer, are you trying to help me learn or bewilder me?!

Think about it-if I already understood what you needed to tell me, would I want you to use really complicated lingo and code-words, or would I prefer you tell me straight? Here’s an actual sentence from a recent book proposal; it merges both of common voice problems into one sentence-I’ve obscured the key bit of jargon to protect the identity of the writer: “ "In my experience, most of us find it easiest to enter the thicket of [jargon] by considering the [jargons] we have received or by hearing about others’ [jargons].”

Read your book proposal aloud to yourself
I promise you that this author would have never kept this sentence if she had spoken this sentence aloud. She would have exclaimed “Someone has stolen my voice!” and reworked this right away. Unfortunately, it’s too late to “find your voice” after you’ve already sent your proposal to an an editor. You might find out, too late to do anything about it, that “we’ve decided your book doesn’t fit the constraints our publishing program.” We often send back the very same, fussy, officious voice to them what started it, mate. (Note intentional voice of Dickensian squalor in foregoing.) Cymbal clash for effect, and good night.