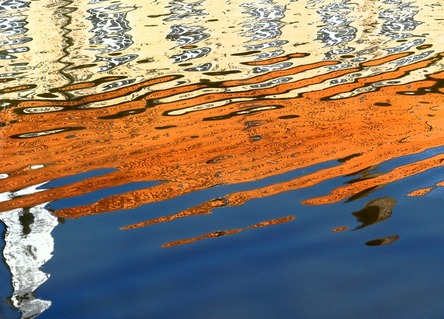 This post is the second part of a two-part series. Part 1 looks at the outward aspects of strategy: creating a proactive, long-term nonviolent movement. This part turns to the inner aspects of strategy: exploring who we are as human beings and building meaningful lives.

Man appears to be the embodiment of want. Want is what he thinks about and want indeed is what he obtains. Contemplate your true being or else there will be want, wrong action, helplessness, distress, and death. ~ Anandamayi Ma

It occurs to me more and more as I listen to the arguments and discussions stirred up by the current crisis that in order to make sense of this crisis for ourselves and to one another we need to start much earlier, from something very basic. We need to ask ourselves, each one of us, three questions:

If this proposition strikes you as a bit out of place ⎯ who has the luxury to delve into philosophy when the world is burning? ⎯ you are not alone.  In the world that we live in today, in this post-industrial culture or whatever we want to call it, the very idea of asking such deep questions is off the table. It never occurs to the vast majority of us. But that’s precisely why I think we have to do it. Because our unspoken answers to these questions are driving us into action, and because it never occurs to us to “contemplate our true being,” as the great saint of modern Bengal quoted above urges, the fate she warns us about sounds very much like what we’re actually going through right now.

Having said as much, let me offer my three answers:

These answers are not my special discovery, needless to say: they are the consensus of the entire wisdom tradition that Huxley called the “perennial philosophy” common to virtually every culture (before our own) and progressively supported in every point by contemporary science. For example, regarding the second point, an impressive volume of scientific literature has established from many different perspectives the critical importance of a sense of meaning, and the pervasive demoralization we are going through because, as John Schumacher recently pointed out, “the assumptions underpinning our allegiance to consumerism are fundamentally dehumanizing.” For this reason, he continues, “Frustration, anger and bitterness are usual (I would say, inevitable) accompaniments.”

Much of the discussion about the current crisis has brought out, quite correctly, that this particular Presidency did not just happen out of the blue and would not be solved by something like impeachment (which 40% of people surveyed presently advocate). But I have heard almost nowhere the pretty obvious fact that we have systematically built up this culture of consumerism that has dehumanized, trivialized, and disempowered us to such a degree that the rise of a narcissistic wannabe dictator was all but inevitable. As the Chhandogya Upaishad says, “Those who depart this world without knowing who they are and what they truly desire have no freedom, either in this world or the next.” The mass media in general and advertising in particular are the cultural tools that are making it impossible to know who we are or what we want.

Even to ask the kind of questions posed here is therefore an essential, culturally subversive act; to answer them somewhat along the lines suggested is to stake out a position on the far side of the “Great Turning” or cultural paradigm shift that must happen to save our democracy and our future.

The Simple Solution for Successful Coaching

Notes, Citations, and Bibliographies
Read the Agreement with Foreword/Preface/Introduction Contributors to Berrett-Koehler Works here.Berrett-Koehler requires all authors to provide sufficient information to lead readers to the...
Read more...

Build Trust at Work, Part 2: Speak With Good Purpose
Do you consistently ‘nail’ every conversation you have at work? After talking to you, do people always, without fail, walk away with… Complete understanding of what you need from them and...
Read more...

Speak With Good Purpose: Build Trust at Work, Part 2
Do you consistently ‘nail’ every conversation you have at work? After talking to you, do people always, without fail, walk away with… Complete understanding of what you need from them and...
Read more...

The Anthropology of Food, Part 2
Shopping for Change or More of the Same? At the supermarket we make choices based not just on price, but relationships, associations, emotions, memories, identity, and values. Using multi-focus...
Read more...

Thirty Examples of Successful Nonviolent Action
In Michael Nagler's latest book, he explains how to use the practice of nonviolence for the sake of progress and challenging injustice. It is literally a weapon of spirit. Many have dismissed...
Read more...

Space Pirates and Zombies 2: Overview
Pirates in space - it's normal, but with the living dead there is a clear deficit. The case in 2011 was corrected by a small studio MinMax Y8 Game, which in addition to them launched into the...
Read more...