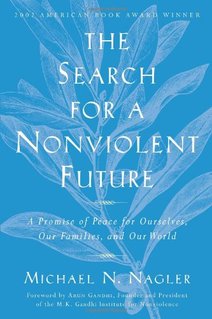 “Your difficulty is not numerical inferiority but the feeling of helplessness that has seized you and the habit of depending on others.”  ~ Gandhi, Mahatma 7.255

Gandhi was accused of using the term swaraj for India’s “freedom” because of its very deep spiritual significance. His response was, so to speak, “guilty as charged.” He had done it deliberately, because what he was engaged in was precisely that, a spiritual struggle that begins and ends with our independence from others. It is only when we are truly free, or independent, that we can really give. There had always been boycotts, but he asked his followers (in this case most of India) to spin and weave their own cloth, then boycott British imports. It was very concrete, economic, but for those who cared to see beneath the surface it was also a symbol of individual freedom that enabled one to see beyond the illusion of helplessness and dependency that is always the first weapon of oppression.

Sumud: Daily Metta
“Satyagraha thrives on oppression till at last the oppressor is tired of it and the object of satyagraha is gained.” ~ Gandhi, Mahatma 6, p.2 One of the words for nonviolence in Arabic is sumud,...
Read more...

Within & Among: Daily Metta
“Independence of my conception means nothing less than the realization of the ‘Kingdom of God’ within you and on this earth.” ~ Gandhi, The Mind of Mahatma Gandhi, p. 314 Gandhi was accused of...
Read more...

Violence is No Help: Daily Metta
“I think Tolstoy called [truth force] also soul force or love force and so it is. . .  [T]his force is independent of pecuniary or other material assistance; certainly even in its elementary...
Read more...

Agency/Freedom: Daily Metta
“Mere withdrawal of the English is not independence. It means the consciousness and the average villager that he is the maker of his own destiny, he is his own legislator through his chosen...
Read more...

Is Going Independent Only a Route of the Rich
New Orleans       Like every true progressive, I’m rooting for the Republicans to continue to bully Donald Trump and hurt his feelings. Who knew “The Donald” was so sensitive? Certainly none of...
Read more...

Trusteeship: Daily Metta
“You may not waste a grain of rice or a scrap of paper, and similarly a minute of your time. It is not ours. It belongs to the nation and we are the trustees for the use of it.” ~ Gandhi, CWMG...
Read more...

Devotion: Daily Metta
“Without devotion, action and knowledge are cold and dry and may even become shackles.”  ~ Gandhi, Message of the Gita, p. 261933 The Bhagavad Gita, the “spiritual reference book” for Gandhi,...
Read more...