Battle of the Books: Amazon vs. Hachette 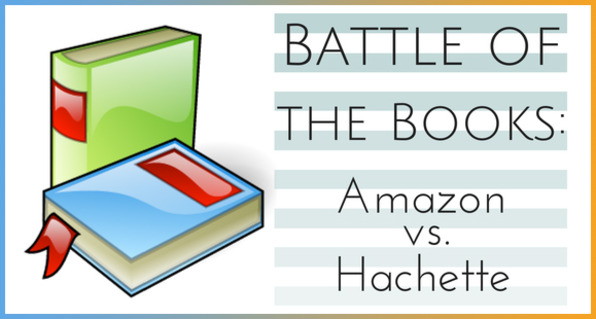 If you haven’t heard about the ongoing battle between marketplace powerhouse, Amazon, and one of publishing’s ‘Big Five,’ Hachette Book Group, then you probably don’t follow news of the literary community. If you have heard about what’s going on and just don’t understand a bit of it, then I’m here to help.

It all started years ago really. While this current debacle has escalated in the media, issues over pricing and contract negotiations are not new between big distributors like Amazon and publishing houses.

Let’s go back a bit, to 2013 actually, when Apple was charged with colluding, that basically means conspiring, with the Big Five-- Hachette, HarperCollins, Simon & Schuster, MacMillan, and Penguin Random House-- to fix the price of ebooks. Since Apple saw how aggressively Amazon was fighting to lower ebook prices, they worked directly with the publishers to keep the ebook prices high in their iTunes/iBooks store. However, they were found out, and part of the terms of the legal settlement were for each of the publishers to renegotiate their turns with existing partners, including Amazon.

Up first in the negotiations, Hachette. And thus all the troubles begin.

So let’s get started. There is just so much to every argument, from publishers, distributors, and authors themselves, whether traditional or self-published. Everyone seems to have a say in the debate. I want to make a few broader points that have to do with this whole ordeal first.

Surprisingly, Amazon can afford to lose money, at least on book sales. They buy books from publishers and mark them down a whole lot, most of the time losing money on book sales. It’s good for the reader, because cheaper book prices, duh. And it can even be good for the author, because more sales, right?

However, this is an entirely different issue with ebooks. You see, Amazon uses physical books as a sort of ‘gateway drug’ for customers to buy other products on their site. Once you’ve started buying cheap books from them, you may be interested in looking at purchasing other things, like household goods, clothing, and electronics. But when Amazon wants to mark down ebook prices on their own terms, by keeping them $9.99 versus the $14.99 price or above that publishers want, publishers, and in turn authors, aren’t so happy.

Unlike with print books, ebooks are distributed through Amazon, but not bought by them and resold with their prices. So publishers want to set ebook prices themselves. Amazon is leveraging their power in the ebook sphere to get cheaper prices for their customers. Obviously lower prices means lower profit for publishers, but Amazon argues that lower prices actually produces more revenue. If prices are lower, they argue, more ebooks are sold yielding higher profit margins. But then, there’s no guarantee from Amazon that lower prices will necessarily mean more sales. Both arguments seem valid, right?

Let’s break it down by a brief (definitely not exhaustive) list of the events bringing us to today in the Amazon-Hachette battle.

What are the next steps?

Hachette’s response to Amazon’s terms will pave the way for the next four rounds of negotiations that the other big publishers are to undergo with the online distributor.

While both sides are fighting for what they think is fair, I think something to remember that doesn’t seem to be getting much discussion is the reader.

Amazon says they are working for the customer, for the reader’s rights, which is under a lot of scrutiny because they are not making a lot of titles available for them as easily as others. But they do want reasonable prices for their customer (or more sales for themselves?). And publishers are fighting for their authors’ rights, they say, by defending ebook prices, which is understandable but more expensive for the consumer.

The question is, then, how much are readers willing to pay for content? Not pages, not electronic ink or real ink on paper, but for the ideas of the books they’re reading? Does lowering ebook prices by $5 make a difference? Are Amazon or publishers really considering the readers’ investment or willingness to support the arts?

Maybe we should all stop and think about what we are buying when we buy a book. More than the physical book or electronic copy, we are buying something influential, something life-changing and idea-forming, something of great importance.

Whoever you choose to side with, remember that a purchase is a vote. Who you choose to buy from, whether it be Amazon, Barnes & Noble, an indie bookstore, or direct from the publisher, you are making a decision that affects someone--an author, a distributor, and everyone involved in the publishing process.

Maybe, if you’re like me, you still don’t know who to support. Until then, I recommend considering libraries. They can always use more support, and we want to see them thrive in these changing times. A checkout from the library is a vote in its own sense. Keep reading, keep supporting, and keep learning!