Why you now obey your devices more than your mother 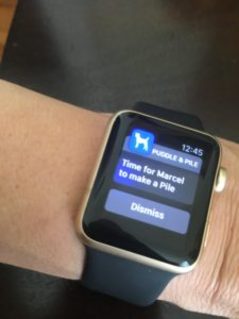 How influential is your mother?

Your mother—like most wise individuals—may instruct you to eat more vegetables, get more sleep and exercise, reduce your stress level, and do countless other things, but…

How often do you immediately follow her advice upon hearing it? And to what extent do you keep complying once she takes a break from telling you what to do?

Now contrast your mother’s guidance with the devices that you either wear or carry with you. How well do they grab your attention and compel you to act?

If you’re like many of us, you’ve decided your devices know best. Loaded with apps, these devices have earned your trust for their important and useful capabilities.

So when they beep, vibrate, illuminate and even woof at you, you interrupt what you’re doing, pay attention and obey them.

With the Mother’s Day holiday fast approaching on Sunday, May 8, the goal here is not to offend mothers and their contributions to their children and society.

Instead, the intention is to show how technology has become a major influencer in people’s lives, wielding power for mostly positive effects.

(And if you think influencers are growing in importance, it’s not your imagination. According to Ben Zimmer the American linguist, lexicographer, and language commentator for The Wall Street Journal, influencers have been around since Chaucer’s time. However, now with the rise and spread of social media, influencers are multiplying faster than ragweed plants producing pollen.)

In the 2007 book, Mobile Persuasion: 20 Perspectives on the Future of Behavior Change, the main editor and contributor Dr. BJ Fogg predicted that mobile phones would soon become the most important platform for changing human behavior.

Back then, BJ forecasted that mobile phones would be the best tool to influence human behavior for these three reasons:

Now, the capabilities have proliferated, not just on phones, but also on wristwatches and other wearable devices.

Even better, as time goes by, the device designers and users are becoming more knowledgeable and comfortable about the human side of technology.

The more skilled designers understand not just behavior design but also applied neuroscience. They realize the value of creating easy-to-use apps, especially those that nudge you at the most opportune moments, when you’re inclined to act. (For more on this topic, check out Nir Eyal’s book, Hooked: How to Build Habit-Forming Products.)

As for users, they’ve clocked in more hours of experience with devices and apps. Plus, savvy users experiment with the settings to adjust them to fit their needs. That helps ensure crystal clear signals that prompt action in a timely manner, which helps change behavior and build new habits.

So whether it’s to take the dog out, dial into a conference call, approve expenditures, or anything else, you can take care of business or other needs or desires with relatively little fuss.

And even though you may not love technology, especially not to the degree that you love your mother and other family members, technology does influence you. It’s like having Jiminy Cricket on your shoulder chirping at you to do the right thing, as my colleague Georgia Patrick of The Communicators describes.

What do you think?

Questions Every MBA Needs to Answer

30 Ways to Greater Happiness and Meaning in Your Life

Who deserves more attention, Mother Nature or digital devices?
More kayaks than cars traveled across South Battery Street in downtown Charleston, SC this past weekend. Boating became the easiest way to get around in this historic neighborhood after 13...
Read more...

We’re Way More Confident Than You Realize, Gentlemen
Telling Women "Be More Confident" is Patronizing Every week I see a new article: women in business— how can we build their self-confidence? Personally, I can’t sip that bland, watery cocktail of...
Read more...

How Is More Important Than Why
At Berrett-Koehler, we believe books can change the world.  Our authors believe this, and they live their mission outside the writing they do in their professional lives. Hundreds more aspiring...
Read more...

New to Twitter? You Know More Than You Think
This post was originally published as a guest post on the wonderful blog of Andy Ross, literary agent.Use what you already knowI’ve introduced a lot of beginners to Twitter, and they always have...
Read more...

Work & Workforce. Then & Now.
Change is continuous but its pace varies. During past 2 decades technology has evolved at a pace never seen before. Technology does not evolve on its own. We need two important set of people –...
Read more...

Who We Are: The Spirit Behind Mothers’ Day
There was a time  years ago when I was reading Plato very closely – I was studying at Heidelberg at that time – and had a flash of insight about who Socrates really was. What I saw was not...
Read more...

Old Media and New Media Have More in Common Than You Think
When it comes to teaching myself web design and online marketing, I’ve tried everything: e-newsletters, podcasts, webinars, online video courses, free ebooks: I gobble those things up like a kid in...
Read more...

Diversity is More than Inclusion
Diversity and inclusion are two of Berrett-Koehler's core tenants of our mission to Connect People and Ideas to Create a World that Works for All. As the conversation around diversity evolves,...
Read more...

Go Bonus: It's More Important Now Than Ever
There is no doubt that pay-for-performance can be an important contributor to organizational effectiveness. It can be a significant motivator of performance and can attract and retain the best...
Read more...