Why and how to declutter your mind 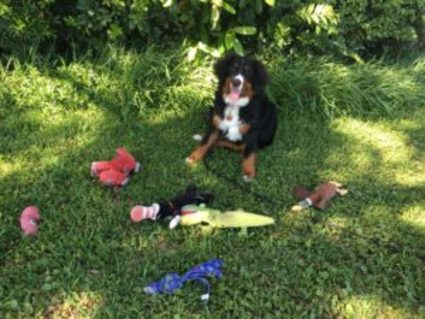 The dog’s unofficial code of conduct is: “If you can’t eat it, play with it or pee on it, leave it alone.”

Meet Marcel. Even though he’s just 7 months old, we’ve noticed he’s intuitively adhered to this code ever since he came to live with us.

(Granted, as a puppy, he defines “toys” very broadly. Until recently his “toys” included all human shoes left unattended on the floor. He also loves most dog toys, especially those that aren’t his. When we’re walking by a neighbor’s home, Marcel always wants to stop and check out any toys left on the lawn, as pictured here.)

The dog’s code of conduct runs against our human nature to worry and stew; however, we can still learn valuable lessons from how dogs behave.

For example, while at first blush, Marcel seems to be exhibiting what we humans would refer to as admirable self-control, he’s actually more concerned about self-preservation.

To him, there’s no need to expend energy on things he can’t control or don’t matter to him. Unless it’s edible, enjoyable or otherwise necessary for his well-being, he’s ignoring it.

He and other dogs don’t agonize over others who might have insulted them, don’t bother with negative self-talk, and don’t rewind and replay incidents in their mind–as humans often do.

This difference between canines and homo sapiens is due to the brain’s pre-frontal cortex. Also called the brain’s executive function, it governs our impulses as well as takes responsibility for abstract thinking, goal setting, decision making, social behavior and other tasks humans do well.

The pre-frontal cortex makes up just 7% of a dog’s brain, compared to 30% of the human brain, according to Emotions in our Pets.)

The human’s much larger pre-frontal cortex allows you to think creative thoughts and do innovative things, which is not the specialty of dogs and cats except for their performance on viral videos.

However, your pre-frontal cortex also has plenty of room for clutter, especially if you let yourself ruminate over hurtful or other unpleasant thoughts or when you overtax it by not taking rest breaks, eating or exercising.

This clutter can consume so much of your “cognitive load” that you can have trouble thinking clearly, much less creatively. You get tired, which makes it harder to control your emotions and other impulses. You even can reduce your ability to experience pleasure.

For more about the challenges of a cluttered mind, see the recent New York Times article Think Less, Think Better by the neuroscientist Moshe Bar. The article includes a link to his latest research on this topic.

To declutter your pre-frontal cortex and re-charge yourself, you can practice mindfulness.  When you’re mindful, you’re in the moment. You’re conscious of your thinking. For more about this, see What your brain needs for optimal performance.

You also can embrace the dog’s unofficial code of conduct as appropriate.

For example, one of my clients who’s just adopted a puppy is discovering how much he can learn and benefit from canine behavior.

As background, with my help, this leader has been working to talk less in meetings in order to open up more air time for diverse voices to speak and be heard. Before, he would just blurt out what he thought in the moment and as a result, he often irritated his peers and his team members. Now, his colleagues are pleased that he’s listening more to them and when he speaks, he’s offering cogent comments.

But learning to practice more self-control takes a toll. By the end of a meeting, he’s often exhausted. Controlling his impulse to talk as well as making the effort to carefully edit what he says consumes a lot of energy for his pre-frontal cortex.

Yet, when he asks himself “What would my puppy do?” he’s able to better regulate his energy. He’s leaving others’ comments alone when they’re random things out of his control that don’t advance the priorities of his team or function.

Will this dog’s code of conduct help you declutter your mind?

Who Was Your Favorite Manager?
While I couldn’t get tickets for the Broadway show Hamilton, I did have an energizing experience last month in NYC. I stopped by the studio at The American Management Association  and filmed a...
Read more...