Are you guilty of using wordos? 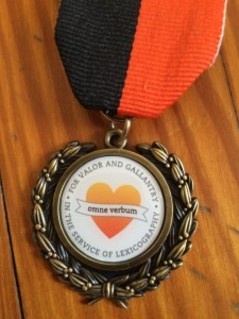 Originally incorporated on February 29, 2008, Wordnik is celebrating its first birthday since its successful 2015 Kickstarter campaign to add a million missing words to the dictionary.

Wordnik’s mission is to “find and share as many words of English as possible with as many people as possible.”

Even before the Kickstarter campaign, Wordnik was the world’s biggest online English dictionary in terms of the number of words.

Yet, Wordnik faced two challenges from some users’ points of view.

First, many words are so new that they don’t have documented definitions yet. And second, Wordnik was not yet allowing user-contribute words or definitions.

The Kickstarter campaign is helping change that. The $58,407 raised is going toward turning these lexical “dark matter” terms into words that have their own distinct definitions that people can find, annotate and discuss. As Wordnik founder Erin McKean says, “every words deserves to be lookupable.”

Also during the campaign, resourceful backers like me used the opportunity to adopt new words, which by definition (pun intended) are part of the million missing words.

My word is wordo, which I’ve used informally for years.

To me, the definition of wordo is the correct spelling of a real word that’s used incorrectly in the context.

The wordo will pass spellcheck—because it’s not technically a “typo.” Wordos also often escape the gaze of an overworked colleague or even a professional editor, but the words don’t make sense when read carefully.

Recent wordos from me include:

Then there’s this wordo that I wish I could claim because it’s a good Freudian slip too, but instead it belongs to one of my clients:

A fellow Wordnik community member has commented that humans do not bear all the responsibility for wordos.

Spellcheck can get carried away and change the word. This is “spellcheckos” (plural like geckos), as named by a fellow Wordnik community member.

While the folks at Wordnik share Humpty Dumpty’s philosophy that “words mean what we want them to mean,” those of us who work in organizational settings need to respect accepted definitions.

Otherwise, by running roughshod with definitions, we can confuse our colleagues or give them ammunition to say we’re trying to conceal important information from them or even trick them.

Words do matter, so we’ve got to choose them carefully and spell them even more cautiously.

As far as I know, my wordos have never gotten me in trouble, but there’s always a first time…. Meanwhile, I’ll wear my Wordnik badge with pride.

If you’re interested, you can review the list of all the adopted words from the Kickstarter campaign here. And you can learn more about the campaign’s back story from this New York Times article, Scouring the web to make new words lookupable

What’s your favorite wordo? Also, if you have helpful tips on avoiding wordos, please share.

What You Are Best at Could Be Your Biggest Problem

How To Say ‘No’ Without Feeling Guilty
“Scheduling for our success is an easy way to plug in to our own power generator to increase the energy required...
Read more...

Heart of Gold
A man has a heart attack and is brought to the hospital ER. The doctor tells him that he will not live unless he has a heart transplant right away. Another doctor runs into the room and says,...
Read more...

Leaders: Are You as Good a Listener as You Think You Are?
When I ask people to talk about the best boss they ever had, they always mention one quality—listening. The best leaders are good listeners. Our research shows that listening is a critical skill...
Read more...

Who Are You BEING as a Leader?
Guest Post by Henna Inam I’m thrilled to host this guest post from Henna Inam whose book, Wired for Authenticity, launched this week.  Henna makes a powerful business case for authenticity…...
Read more...

Top 7 Reasons To Be Glad If You Are Renting Home
No one ever won the controversial debate that what is better- owning a home or renting - with one simple answer! Well, home is one such need that is essential for every family, clearly to say it...
Read more...

Are you Inky or Blotchy?
By now you’ve hopefully heard the amazing story of Inky, the escape-artist octopus from New Zealand. From this AMs WaPo: By the time the staff at New Zealand’s National Aquarium noticed that he...
Read more...

Be Who You Are
Image Source by Mark Levy How can you make a difference in your organization and in the world? I know of a small yet potent way: Make sure your job reflect who you really are, because who you...
Read more...

Benefits of Using Cloud-Based Accounting Software
Accounting is one of the important activities in any of the businesses. It can be said as the best guide for the business since the reports play a good role in taking the right decisions at right...
Read more...