5 ways to focus in a crisis 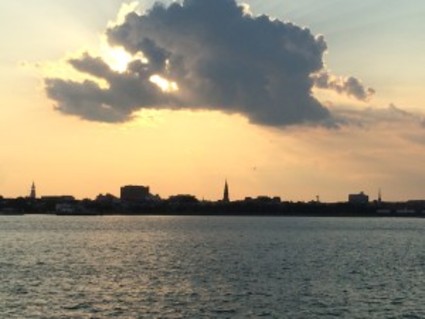 How do you focus on anything, especially work, when…?

…Your home air conditioning unit stopped working and inside temperatures soared to 85 degrees.

It wasn’t easy; however, that’s life in Charleston, SC these days.

Charleston is a relatively small, tight-knit community. Many of us had connections to the victims of this appalling racial hate crime. Even though my husband and I have only lived here 15 months, we’re just two degrees separated from three individuals who lost their lives.

The shock, anger and grief surrounding this horrific incident combined with the heat—which natives said was even extreme for this time of year—could have contributed to another combustible situation.

Yet, people kept their cool. How could we express rage when family members who less than 48 hours after the killings expressed compassion for the alleged murderer? At his Friday afternoon bond hearing, one family member after another with pained voices said they forgave him for his acts.

Still, life seems surreal, especially with the Confederate flag flying high over the State Capitol about 100 miles away while the United Stated and South Carolina State flags were respectfully set at half-mast. (Five days after the killings, Charleston area politicians and the governor have called for the flag to come down as an outdated symbol.)

Nonetheless, there’s a need and desire to pay attention and concentrate on work and other responsibilities.

Luckily, thanks to my crisis work and applied neuroscience education, I used five brain-friendly coping mechanisms to help me regain my focus. They’re described here in hopes they may work for you in other crisis situations.

1. Recognize that you’re a human, not a machine, and you can’t work as effectively as you usually do. You need to acknowledge your feelings, and take time to consider how you will process what happened, including taking time to grieve. And don’t be bashful about letting others know what you’re going through. For example, I reminded the customer service reps from the national home warranty company that those of us calling from Charleston were not only uncomfortable with the extremely hot temperatures but also the tragedy in our backyard.

2. Build frequent breaks into your schedule as well as additional checks and balances. Rather than push yourself to work long stretches at a time, take breaks every 20 minutes or so to refresh. For example, with the heat, I was either refilling my water bottle or switching to another beverage to avoid dehydration. I also set aside finished work to review later on my own, or ask someone to peer review it for me, to ensure my work quality would still be high.

3. Adjust your environment to make it less stressful for yourself and others. Within 12 hours of losing air conditioning last Tuesday night, I drove our dog Gustav to his “Hound Hosters” family that puts him up when we’re out of town. Since our home had become inhospitable for a dog whose coat is better suited for the Swiss Alps than 100+ temps and 100% humidity, I was concerned about his wellbeing.

Now what we have a new air conditioning unit, Gustav is back at the house and staying indoors because we remain under triple digit heat advisories. He didn’t even join me as usual at the Farmers’ Market at Marion Square, just steps from the Emanuel  AME Church on Calhoun Street, the site of the shootings. Nor has he done any of his Therapy Pet work, which could be healing for others as well as me. It’s the prudent move considering the weather.

Rather than stay in my home office in the heat, I had planned to go work at one of the local Starbucks. However, I needed to be home to meet service people. To stay as comfortable as possible, I wore Gustav’s cooling bandana around my neck. (That further convinced me that Gustav belonged at his air-conditioned Hound Hosters family home.  After 10 minutes, the bandana warmed up and felt heavy around my neck.)

4. Monitor your media diet. When it’s hard to focus, it’s easy to immerse yourself in media coverage, either of the event you’re part of or others. Before you know it, you could enter a rabbit hole and minutes—or hours—could pass by. You might feel more informed, but you also could be more distraught and more on edge, especially because of the intensity of the coverage and its often speculative and adversarial nature. Plus, you could feel guilty about not applying some of that time to work.

So put time limits on yourself or watch some for set periods with friends or family members. Remember that one of the advantages of today’s 24/7 news cycle is that the media outlets repeat their coverage. Plus, you always can access information online at your convenience.

5.  Get out and about. We’re social creatures, and being around people during difficult times can make us feel better than if we were to bunker down. When we’re alone, we can tend to ruminate on a limited group of topics, which can stifle our thinking and decrease our ability to pay attention. Hearing others’ perceptions of the same events or even talking about totally different things can be like a breath of fresh air.

Also, when you take other actions, such as making a contribution to Mother Emanuel Church or the fund of your choice, doing volunteer work, taking a stand (such as supporting the retirement of the Confederate Flag), exercising, or getting involved in something outside of your normal  routine, you can feel invigorated, which will help you focus better later.

Even the act of deciding to take action, social or otherwise, is powerful. You take control of your schedule—and your life. Some semblance of control can feel empowering.

The father of crisis management, Ian Mitroff, recommends to “Think like a sociopath, act like a saint.” when preparing for crises. Not surprisingly, his advice kept popping into my head last week.

You never know what will happen, but for the sake of friends, family and community members as well as yourself, please recognize that you need to be prepared to deal with the unexpected.

Meanwhile, here’s hoping that we can start to address and deal with the root causes of this tragedy so that houses of worship can return to being safe places and we can better honor the nine victims.

Keeping the Focus on What Really Matters

From Crisis to Calling

Finding Your Moral Center in the Toughest Decisions

5 ways a golden thread improves your focus and clarity
Trying to tighten the linkage between business strategy and operations on either the organizational or individual leadership level? If so, don’t talk “alignment.” Instead, emphasize the...
Read more...

The Engagement Crisis on LinkedIn
Let’s be real: does anyone know of a LinkedIn group that is not a hellish wasteland of linkspam? Because I’m desperate for a professional forum where people are actually talking and listening to...
Read more...

What Are The Most ‘Attractive’ Numbers To Focus On To Be Successful in 2016?
Good health is not something we can buy. However, it can be an extremely valuable savings account. – Anne Wilson Schaef Because it’s that time of year, you probably expect this blog to be about...
Read more...

Voice Is a Choice: 5 Ways to Write with Chutzpah
Image Source Have you ever read a book that knocked you out like a shot of Nyquil? How about an author who spends the whole book burying their ideas under a pile of jargon and general...
Read more...

Dr. David Goodrich’s Tribute to Rick Piltz: A Reflection of the Current Crisis in California
During his career in climate, Dr. David Goodrich was Director of both the US Global Change Research Program (USGCRP) Office in Washington and the Global Climate Observing System Secretariat in...
Read more...

Guest Post: 5 Ways to Wage Peace
In Jim’s previous post, he discussed The Grand Crisis Response Management Strategy: 5 Crucial, Time-Sensitive Steps that End All Crises. In continuing the segment on what to do during and after a...
Read more...

Are you disappointing or reassuring with your crisis messaging?
Stay quiet or speak out to your employees about the latest crisis? Yes, this is another dilemma facing CEOs and other leaders in our VUCA (Volatile, Uncertain, Complex and Ambiguous)...
Read more...

Veggies at the Liquor Store — and 5 Other Ways to Bring Food to Your Community
Out-of-the-box ideas for putting healthier food on our neighborhood plates — and make friends doing it.
Read more...

What Should HR Leaders Focus On In 2014?
The main focus for most organizations in 2014 should be on talent management and talent development, particularly the managerial and technical roles that are the difference makers.  One of the...
Read more...