Playing By the Rules: Establishing Procedures for Resolving Team Conflicts

Laura Stack is an award-winning keynote speaker, bestselling author, and leading expert in the field of human performance and workplace issues. She is the president of The Productivity Pro, Inc., which specializes in productivity improvement in high-stress organizations. 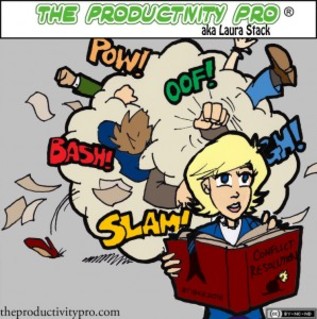 “You have to learn the rules of the game. And then you have to play better than anyone else.“—Albert Einstein, German-American physicist.

With rare exceptions, first-time ballerinas don’t perform a perfect Swan Lake, inexperienced writers don’t produce their magnum opuses immediately, and brand new teams don’t slide effortlessly into perfect productivity. There’s always a learning curve, a period when individual members test their boundaries, discover where their jobs end and others begin, and yes, figure out the pecking order. You can expect some delay before high performance emerges, but you can speed the process by setting ground rules—specific procedures to ensure that all team members play well with each other.

Effective teams know how to work towards mutual resolution, even when members bump heads. Some level of disagreement within a team is healthy, after all, because it fights groupthink and jumpstarts team creativity. But sometimes teammates just rub each other the wrong way, or what starts as a simple disagreement gets out of hand. Thus, all teams need standardized ways to diagnose, evaluate, and resolve true conflicts.

Most of us move into teams that already exist, with such procedures already in place. But there may come a time when you either build a new team from scratch, or join such a team. It’s worth taking the time to hammer out workable rules of conduct early on. If your team leader doesn’t take the initiative, proactively suggest you follow these steps.

The rulebook may be exactly that: a list of printed rules distributed to everyone, so all can read it, and no one can complain they didn’t receive it. But by no means should you consider this a static document; make it a living one, easy to amend as circumstances change and your team grows. Think of it as your team’s Constitution.

Begin by brainstorming a reasonable set of ground rules at your first meeting. Alternately, have everyone come up with a batch independently and then compile them before settling on the final process; independent brainstorming sometimes works better than the group version. The ground rules define what counts as acceptable behavior, emphasizing basic politeness, teamwork, and information sharing, as well as a dedication to maintaining a smooth workflow. They may include such items as:

These represent just a bare beginning, which may be all you really need as long as you emphasize mutual respect. Whatever you decide, your leader is responsible for quickly suppressing anything deviating from this philosophy. The most productive teams damp down disturbances before they harm the team, much less come to the attention of outsiders.

As one pundit points out, “Don’t fear conflict; embrace it – it’s your job.” Any other ethos will slow you down and limit your productivity. As with so many other business factors, communication serves you well here. The team leader should encourage everyone on your team to communicate clearly and directly with each other, rather than vaguely, and to find out what everyone requires in order to do the job right. No one should fear disagreement with anyone else, as long as they have something reasonable to add to the discussion, or an alternate solution to a problem. While arguing just to argue is bogus, a devil’s advocate can stir up trouble in a positive way.

I’m not saying you and your teammates should discard your personal needs or personalities at the office, but do remember you’re working not just for your own good, but for everyone’s. Acknowledge that conflict will occur, but ensure it does so within the bounds of a cooperative process, where communication remains free and open at all times. Pick your battles, ignoring the minor in favor of the crucial—while still coloring within the lines you and your team have drawn to govern your interactions.

Team productivity requires compromise, empathy, and understanding, based upon standard rules of acceptable behavior. You can build a foundation on this common ground, secure in the knowledge that all people and opinions will be valued.

© 2015 Laura Stack. Laura Stack, a.k.a. The Productivity Pro®, helps professionals achieve Maximum Results in Minimum Time®. For nearly 25 years, her keynote speeches and workshops have helped professionals and leaders boost personal and team productivity, increase results, and save time at work. Laura is the author of seven books by large publishers. Her newest book, Doing the Right Things Right: How the Effective Executive Spends Time, hits bookstores in January. Widely regarded as one of the leading experts in the field of performance and workplace issues, Laura has been featured in the Wall Street Journal, the New York Times, and USA Today. Connect via her website, Facebook, or Twitter.