Ken Jennings, Ph.D. is a senior partner at VentureWorks and a managing partner at Third River Partners, a consultancy that specializes in leadership development and strategy execution. 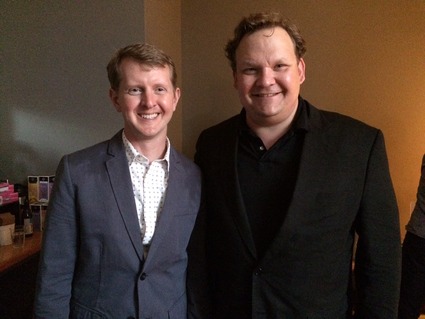 I was a guest on this week’s episode of LiveWire Radio, discussing life and times with host Luke Burbank. I don’t know if it made the final broadcast, but I also played a few quick rounds of the “Question Game” from Rosencrantz and Guildenstern Are Dead with my celeb crush Andy Richter. As far as I know, this is the first ever battle of wits ever held between a Jeopardy! uber-champ and a Celebrity Jeopardy! uber-champ. Historic!

Here’s your occasional reminder that I also write a weekly column for Woot.com, debunking popular misinformation (this month: myths about American literature) and another one for Conde Nast Traveler, about geographic oddities (this week: the island that India and Bangladesh fought over for forty years–only to have it disappear just as the issue was being settled!)

Finally, I heard this week from Eric Williams, who made a documentary called Unforgettable, about his hyperthymesiac brother Brad. He’s been working on it for many years, but apparently the finishing touches are now all, er, finished, and the movie is available to buy via Kickstarter or watch on Vimeo. There’s one fun sequence where Brad and I hang out at a bar and I take on his amazing memory at a trivia game. Big mistake. Anyway, highly recommended for fans of weird brains.