The Good News according to Pew 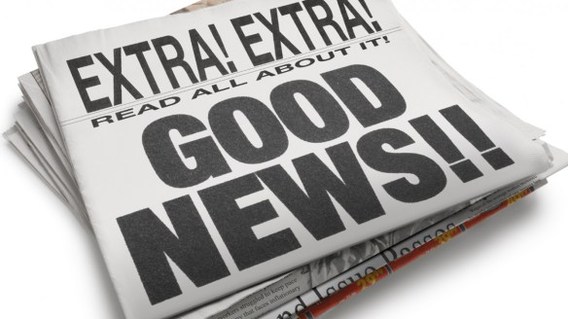 Earlier this month the Pew Forum published its anxiously awaited research report, America’s Changing Religious Landscape, a survey of how religious affiliation and demographics have changed between 2007 and 2014. The biggest news in the report: the dramatic drop in the percentage of the U.S. population who claim Christianity as their religion of choice, and the corresponding rise in the number of “Nones” (as in “none of the above religions”).

So I’m not being a Pollyanna when I say that, while the Pew report may be bad news for religion, it’s Good News for faith, Good News for Christianity, too, and maybe even Good News for my own Episcopal Church, if we have eyes to see it.

So what do I see as the “Good News according to Pew?”

People are not operating on default anymore when it comes to faith. The Pew report tells us that an increasing number of people are actually thinking about religion and faith, which is leading them to make choices about it, rather than operating on autopilot. That an increasing number of people are choosing to leave Christianity is unavoidable: a natural sorting out that occurs when people decide to act out of conviction rather than habit. It means that the people who stay are more likely do so out of conviction rather than habit. Watching people leave may be sad, but it’s not bad, if they are leaving because they don’t want to continue faking it, because if they ever decide to return, it will be out of choice not inertia.

Faith is becoming more important than religion. Of the religiously unaffiliated, only about a third are rejecting both organized religion and faith in God. Another third is averse to religion but still consider themselves people of faith. And still another third rejects religion but doesn’t give much thought to faith. The reasons people give for renouncing religious affiliation are many and varied: hypocrisy, judgmental attitudes, rigid systems of belief or practice, a focus on defining who’s “in” or “out,” and more. These are criticisms of the human organization of religion, not of faith in God.

Christianity is, at its heart, a faith movement, not a religion. Jesus never asked his disciples to go out and start a new religion. The Apostle Paul thought religion was irrelevant. Richard Hooker, one of the founders of the Anglican/Episcopal tradition once said that what makes a person Christian is faith in Christ, and that doctrine and practices are secondary: our ways working out our faith in our lives. I believe that if we are willing put relationship with God above our ideas about doctrine and practice, the unaffiliated – and many others – may find us more inviting.

Christianity, at its heart, transcends culture. To paraphrase Jesus, we are meant to be in the culture but not of the culture. For more than 1½ millennia, ever since its intimate entanglement with the Roman Empire, Christianity has struggled to wean itself from its addiction to being one with the dominant culture. One positive implication of the Pew Reprt is that if we continue to disentangling ourselves from culture, we will not only become more inviting to the unaffiliated, but will make it more likely that people who do affiliate with us will do so out of faith, rather than popularity or power.

Both liberal and conservative denominations are declining. Another positive contribution the Pew Report makes may be to finally lay to rest the narrative that conservative Christianity is growing numerically, and therefore true, while liberal Christianity is in numerical decline, and therefore false (as if increasing popularity was ever the ultimate test of truth). I have long suspected that if an apples-to-apples count were made (i.e. numbers were adjusted for the differences in how most conservative and most mainline denominations count members), conservative denominations would have been showing a decline for some time now. Pew’s numbers for the first time are showing this to be both true and especially pronounced among younger people, with some leaving conservative congregations because they perceive them as rigid and judgmental, some leaving liberal congregations because they perceive them to be mushy and laissez-faire, and some departing Christianity altogether because they perceive all the infighting between liberal and conservative Christians to be un-Christian. Now that Pew has knocked down the “only conservative churches grow” shibboleth, perhaps we can all get on with living and sharing the Gospel.

Christianity is becoming more diverse. Martin Luther King, Jr. once Sunday morning worship, “the most segregated hour of Christian America.” A final bit of good news from the Pew Report is this: over the last seven years Christianity has grown more diverse, from 29% non-white in 2007 to 34% in 2014 – not a huge shift, but a significant one – across almost every denomination save Mormon. This may be yet another sign of Christianity moving away from being for many a casual way of identifying with the dominant culture and the benefits conferred by being so identified.

Might the Episcopal Church benefit from these trends? Maybe…but don’t get cocky. Some of my friends have suggested that the Episcopal Church may be uniquely poised to a take advantage of these trends.[1] They point to many high-profile Evangelicals who have left their denominations found themselves drawn to the liturgical depth, sacramental celebration, and appreciation of divine mystery and paradox they have found there. In this, too, I agree with my friends. It is, after all, my own story: a Jewish person who was brought into the Church by an Evangelical, Pentecostal friend, yet found my true home in the Anglican/Episcopal tradition (the most Jewish church I could find). Still, I would caution my friends not to get cocky. Most of my Evangelical friends departed from their denominations as the result of a long, thoughtful, prayerful process of discernment that revealed to them that their own traditions were missing something: something they found in our tradition. But we must remember that there are people leaving our tradition because we sometimes confuse tolerance with changing the subject when anyone asks what truths we believe in. So before we start thinking of ourselves as “all that and a bag of chips,” we might also benefit from the same kind of self-critical examination that has sent some of our Evangelical brothers and sisters in our direction.

Some have proclaimed that the Pew Report presages “the end of casual Christianity.”[2] I hope they’re right. Because that would be very good news!

[1] Allisa Newton. (2015). “Why that Pew Report is great news for the Church,” in The Bishop’s Staff Blog – Episcopal Diocese of Olympia website at http://www.ecww.org/blogs/653/why-pew-report-great-news-church.