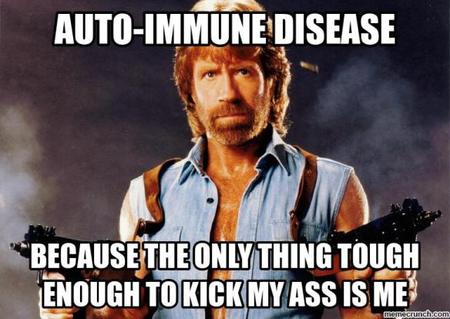 For the last week or so, I have been writing and posting a series of blog posts on the Episcopal Resurrection movement: one post on the Memorial to the Church and ten on the enabling resolutions. No small feat, that, considering that my “day job” is leading a still-growing, mature church plant.

Last night I put the last post – and then myself – to bed. As I drifted off into dream land, I realized that I had two worries:

In either case, it would be a sign that we are suffering from “Auto-Immune Church Syndrome.”

The medical definition of autoimmunity, one of the least-understood of human pathologies, is when the body mistakes perfectly healthy cells, tissues, or organs of the body for pathogenic threats, causing the body’s immune system to attacked the perceived “invaders,” and either kill them and/or expel them. Examples include, Chrone’s disease, Type I diabetes, multiple sclerosis, and rheumatoid arthritis.

Auto-Immune Church Syndrome happens when a church has been sick for so long that its begins to think of its condition as normal, simply because it has become the status quo: one that feels like homeostasis, even though it is really an almost imperceptibly slow slide into death. When agents of healthy change come into an autoimmune church, they are perceived (correctly) as a threat to things as they are, which activates the church’s immune system, which removes those threats from the body.

So my first fear is that the body that is the Episcopal Church will (rightly) view the enabling resolutions sponsored by the Episcopal Resurrection movement as a threat to things as they are and eliminate them: voting them down before they the can do any “damage” to current, longstanding yet not quite healthy, status quo.

My second fear is that the Episcopal Resurrection resolutions will pass but the church’s antibodies, now alerted to the perceived invaders, will weaken them (with “to the extent possible” language) in the process of passing them, or find ways to co-opt them after the fact. To some degree, this is what happened with the Taskforce for Reimagining the Episcopal Church (TREC), to the point that the final recommendations were not substantial nor specific enough to turn the Titanic away from the iceberg. And while these nine resolutions are a great start, they do not cover all the things that currently hold the people of the church back from taking the risks necessary for the church to move from death into life.

One example: the Title IV disciplinary process badly needs amending. The categories of offenses (e.g. “Conduct unbecoming a clergy”) and complainants (e.g. family members of alleged victims) are big enough to drive a Mack truck through. The conditions of the investigation (e.g. the accused is sworn to confidentiality but the accuser is not) are way out of balance. And there is no easy way to identify and dispense with specious accusations, and no provision for penalizing those who make specious accusations. Which means that those of us who push boundaries, experiment, and explore new ways of doing and being church are much more likely to find ourselves dealing with specious charges of “conduct unbecoming” than those who place a premium on playing it safe and offending no one. I can tell you from personal experience that it can be a huge distraction and enough to make on think twice about sticking out one’s neck.

Ultimately, changing structures, processes, and rules, while necessary steps, in themselves are never sufficient to make change. That will require thousands of leaders – and their people – opening their hearts to change. As I and others have said elsewhere before the church can experience resurrection, there is much that we must let die.

Still, for all it’s faults, I love this church, and I pray for its resurrection…

A Letter to the Church

How baffling you are, oh Church,

and yet how I love you!

How you have made me suffer,

and yet how much I owe you!

and yet I need your presence.

You have given me so much scandal

and yet you have made me understand what sanctity is.

I have seen nothing in the world

and yet I have touched nothing

How often I have wanted to shut the doors of my soul in your face,

and how often I have prayed to die in the safety of your arms.

No, I cannot free myself from you,

because I am you, though not completely.

And besides, where would I go?

Would I establish another?

I would not be able to establish it without the same faults,

for they are the same faults I carry in me.

And if I did establish another,

it would be my Church, not the Church of Christ.

And I am old enough to know

that I am no better than anyone else.

– by Carlo Carreto, from The God Who Comes

Crossing Boundaries To investigate Problems in the Field: An Approach To Useful Research By Amy C. Edmondson

The New Rules of Green Marketing

#EpiscopalResurrection #GC78 – D013: Budget Process – “Budgeting Is No Joke”
By Ken Howard Budgeting is serious business. It process of budgeting needs to be clear, consistant, fair, and just. Our current canons contain a number of unclear, conflicting, and outdated...
Read more...

#EpiscopalResurrection: Rez 5 – Amend Title V (to simplify the merger of dioceses)
By Ken Howard I’ve interviewed for many executive positions in my day, both before and after my ordination. Once they’d finished interviewing me and it was my turn to ask them a...
Read more...