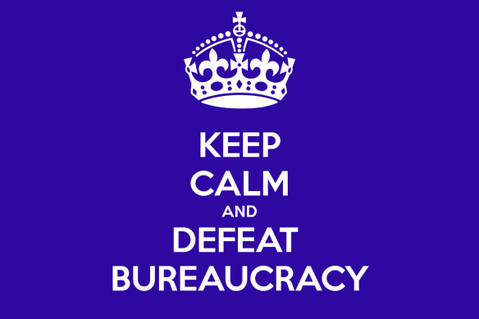 At first blush, this may sound like a drastic measure. And it is. It is radical, serious, far reaching…and absolutely essential.

I assume that this century-old structure was set up with good intentions. I assume that there must have been a time when the provinces served a beneficial purpose in our denomination (or the system would not have survived its infancy). But IMHO, that day has passed.

Bureaucracies have a way outlasting their purpose – their reason for existing. No organization wants to be without a purpose and the power to achieve it. So rather than terminating their existence, they create a new reason for being. Once in a while, this new purpose is a logical extension of the reason for which it was created. Occasionally, it may even be beneficial. But more often than not, when a bureaucracy has lost the power to proactively benefit the greater organization, it instead resorts to exercising the power to obstruct.

That is where we are with most of the provinces in the Episcopal Church today. The few that are doing positive and beneficial work are the exceptions that prove the rule. One has to ask whether the good done by the few, justified not only the existence of the many but the time, effort, and resources that go into propping them up, especially when those resources must be appropriated from the dioceses to the denomination before being disbursed by the denomination to the provinces. I am a strong proponent of networking and collaboration for the common good, but speaking for myself, I would rather those dioceses use those funds directly to experiment with more creative, responsive, and purposeful ways of networking.

As the authors of this D011 also point out, eliminating the provinces has other benefits, including the ability to adjust the numbers of members on certain committees once provincial representation is no longer required. Specifically, they propose the following membership changes:

Let’s do the right thing here: Have the organizational equivalent of a memorial service. Honor all the provinces for the purposes the once served. Hold up the few that are still doing beneficial work for the great examples of networking that they been to us. And then give the entire structure a proper burial.

The Search for Sanity in a Wired World

Eliminating Low Value Business Activities
TRANSCRIPT We’re critical to the growth of our businesses. I mentioned that I had a little newsletter. I used to do that newsletter monthly. It was a good newsletter. It took me a day to write...
Read more...

1-Minute Exercise to Eliminate Hesitation
Doubt. Unsettling, isn’t it? Like a rock sewn into your shoe. Yet, doubt’s embedded in your DNA. It evolved to be a strength. A trigger to pick up your head, look around, and consider if you’re...
Read more...

The Fastest Way To Feel Calm
“When you own your breath, nobody can steal your peace.” ~Author Unknown     “There is a real possibility that I...
Read more...

Keep the Momentum Going to Bring About a Life Economy
Just a couple months into 2016… What an exciting year already! I started off the new year with a journey to Guatemala, where the group I led participated in sacred ceremonies with Mayan teachers...
Read more...

How to Defeat the Merchants of Fear
A Question and Answer Session with John PerkinsJohn Perkins is the author of Berrett-Koehler’s bestselling book Confessions of an Economic Hit Man. He travels the world giving talks about how to...
Read more...