Press Release: The Rise of the American Corporate Security State by Beatrice Edwards 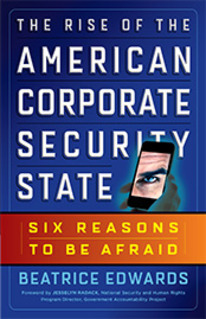 The Rise of The American Corporate Security State:
Six Reasons to Be Afraid

“A must-read for those who love this country and wish to preserve its fast-fading democracy.”
- Daniel Ellsberg, Pentagon Papers whistleblower and Director, Freedom of the Press Foundation

We recommend you read the enclosed advance copy in privacy, and then immediately destroy it. The sensitive content found within The Rise of the American Corporate Security State: Six Reasons to be Afraid, by Beatrice Edwards - Executive Director and International Program Director for the Government Accountability Project (GAP), the organization providing legal representation to Edward Snowden - will seem like the stuff of conspiracies, but we assure you, the information and the threats to American privacy are real. The information suggests that the and will you.

In The Rise of the American Corporate Security State , Edwards connects the dots between the NSA and corporate interests, and how he who holds the most sensitive info on holds the power.

You may think you’re not a threat. You (usually) pay your taxes on time, maybe you’ve never been arrested or tried to get out of jury duty. We ask you, have you purchased any books or eBooks by Arab authors recently? What could people assume about you if they saw your recent Google searches? We are told that if we have nothing to hide, we have nothing to fear, but say that to the 68-year old Midwestern who suddenly finds herself on the no-fly list for no apparent reason.

Backed by an overwhelming mountain of evidence, Edwards reveals how the 4th Amendment was abolished without citizens’ or even congress’s knowledge, under the guise of protection from terrorism and an alleged cyber war. Even more shocking, -

Despite the corruption polluting the justice system, Edwards offers a plan of action to take back those rights of ours that have been commandeered by economic interests in cahoots with government forces.

We hope that you’ll take a closer look at this book and reconsider just how secure you are in a security state. And know this, .

Beatrice Edwards is both the Executive Director and International Program Director at the Government Accountability Project (GAP), which is one of Edward Snowden’s legal representatives in the US. She holds a Master’s in Latin American Studies from the University of Texas and a PhD in Sociology from American University.

Six Reasons to Be Afraid

The Rise of Corporate Power & the Disabling of Democracy