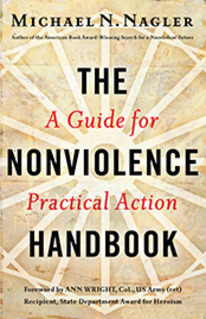 The Nonviolence Handbook:
A Guide for Practical Action

In a few short pages, Michael Nagler has been able to present the accumulated wisdom of activists, prophets, and social theorists in a way that is powerfully instructive, accessible, and deeply moving

Despite the fact that two of the 20th century’s most monumental campaigns for social change, the civil rights movement and the drive for Indian independence, achieved their aims through nonviolent action, the world continues to view nonviolence as a passive and largely ineffectual tactic.

In The Nonviolence Handbook , renowned peace activist Michael Nagler proves precisely the opposite: nonviolence is in fact an aggressive and highly effective approach. “Nonviolence is not the recourse of the weak but actually calls for an uncommon kind of strength; it is not a refraining from something but the engaging of a positive force,” Nagler writes. But it demands tremendous courage and discipline and needs to be carefully thought through.

Distilling the core theories of nonviolence and drawing deeply from the lives of leaders such as Mahatma Gandhi and Martin Luther King Jr. this short and powerful handbook offers both step-by-step guidance for planning a nonviolent resistance strategy, and advice for building change movements capable of restructuring the very bedrock of society. Nagler identifies the specific tactical mistakes made by unsuccessful nonviolent actions such as the Tiananmen Square demonstrations and the Occupy protests. With The Nonviolence Handbook, activists have a guide to practical, strategic advice for developing a disciplined and effective nonviolent strategy to address any issue or conflict.

Michael N. Nagler is the founder and president of the Metta Center for Nonviolence. He cofounded the Peace and Conflict Studies Program at UC Berkeley, where he is professor emeritus of classics and comparative literature. Among other awards, he received the Jamnalal Bajaj Foundation’s International Award for Promoting Gandhian Values outside India, joining other distinguished contributors to nonviolence such as Archbishop Desmond Tutu.

A Guide for Practical Action

A Guide for Practical Action