Press Release: How the Poor Can Save Capitalism by John Hope Bryant 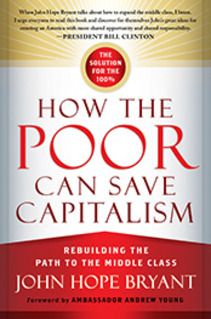 How the Poor Can Save Capitalism: Rebuilding the Path to the Middle Class

“When John Hope Bryant talks about how to expand the middle class, I listen. I urge everyone to read How the Poor Can Save Capitalism and discover for themselves John’s great ideas for creating an America with more shared opportunity and shared responsibility.”
-Former US President Bill Clinton

"John and I want the same things. And the goals of this book are the same goals of my Rebuild The Dream campaign. He has provided the roadmap to economic recovery for this country at a time when economic inequality is at its peak. I for one will be following the steps laid out in the HOPE plan."
-Van Jones, Former Advisor to President Obama and host of CNN's Crossfire

How the Poor Can Save Capitalism reveals Operation HOPE founder and successful businessman John Hope Bryant’s strategy for restoring the American middle class and eradicating poverty. “For capitalism to thrive, the poor and middle class must thrive,” Bryant writes. “We must make financial literacy - teaching each and every one of our children the language of money - the new civil rights issue for the twenty-first century America.” According to Bryant, capitalism isn’t to blame for a struggling economy; we’re just doing it wrong.

- 76% of Americans are living from paycheck to paycheck, while 60% of American GDP is consumer-driven.
- 1 in 4 of the Americans who qualify for the Earned Income Tax Credit never ask for it - that’s $9 to $10 billion in unclaimed funds that could be put towards mortgages, car payments, education, etc.
- 47% of U.S. employers require a credit report as part of the hiring process.

In the book, Bryant exposes the historical roots of poverty, explains why the solutions tried so far have proved insufficient, and offers a way forward. He lays out what he calls a Marshall Plan for our times, a series of straightforward, actionable steps to build financial literacy and expand opportunity so that the poor can join the middle class.

Praised by Dr. Bernice A. King of the King Center as “a practical idealist who dreams big and then moves with precision to action,” John Hope Bryant aspires to create a thriving economy that works not just for the 1% or even the 99%, but for the 100%.

- Saving America’s cities.
- Rebuilding the American middle class.
- How our current credit score model keeps people in poverty.
- Reframing our definition of poverty, and recognizing the “teetering class.”
- Financial literacy as a civil rights issue.
- A new understanding of capitalism, or how to do it the right way.

John Hope Bryant is an American financial literacy and poverty-eradication activist and entrepreneur. He has a diverse background in business. He is the founder, chairman and CEO of nonprofit Operation HOPE, member of the President’s Advisory Council on Financial Capability, and co-founder of Global Dignity. Since its inception in 1992, HOPE has served more than 2 million individuals, directed more than $1.5 billion in private capital to America's low-wealth communities, maintains a growing army of 20,000 HOPE Corps volunteers. He is a member of the Forum of Young Global Leaders for the World Economic Forum, and sits on the Forum’s Global Agenda Council. He served as the vice chair on the U.S. President’s Advisory Council on Financial Literacy and as the chairman of the Committee on the Underserved. Bryant is the author of the 2009 bestseller Love Leadership. Bryant lives in Atlanta, but grew up in Compton and South Central Los Angeles. Operation HOPE is a global nonprofit, based in Los Angeles.

How the Poor Can Save Capitalism

Rebuilding the Path to the Middle Class