Who Are You BEING as a Leader?

Learning strategist, speaker and author of the Amazon bestseller, Help Them Grow or Watch Them Go: Career Conversations Employees Want. 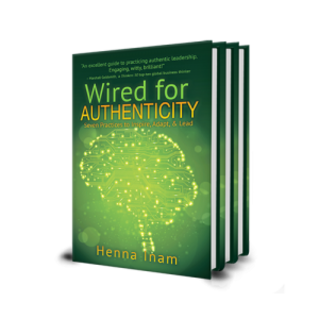 I’m thrilled to host this guest post from Henna Inam whose book, Wired for Authenticity, launched this week.  Henna makes a powerful business case for authenticity… but she makes and equally powerful human case for it as well. Looking to reduce stress, enhance trust, and be able to pivot more nimbly in today’s chaotic workplace? Authenticity is the answer!

Who we become as leaders comes not from books or training but from paying attention to the small and big choices we make every day. Just last week my 16-year old called me in a panic around 11:30am. She asked if I could come and pick her up from school. Her voice had a sense of urgency in it. She had a major Chemistry test that she hadn’t studie

In that moment, I think she actually believed this and wanted to have the weekend to study for the test. Having had plenty of panic attacks about tests, I felt her fear. A part of me felt compassion for her, another part wanted to have her learn to be more responsible, another part wanted to help her get a good grade. Who was I going to be as a mom and a leader in that situation?d adequately for and was afraid she would get an “F” on it, severely impacting her overall grade. This (she went on to say in one breath) would destroy her G.P.A. her chances of getting into a good college, and her career plans. Basically, she could write off her life.

Think back now to a decision where you felt stuck. This often happens when we have competing parts of ourselves wanting expression. As leaders, many times we don’t slow down enough to pay attention to these competing voices. These big and small decisions shape us as leaders, yet, are often unconscious because we make these decisions often from habit, particularly when we are moving fast.

In my book, Wired for Authenticity, one of the seven practices of authentic leadership I talk about is “Choose Be Before Do”. In a fast-moving 24/7 work environment, we need leaders today who are both trustworthy as well as agile to the changing needs of a diverse global marketplace. Our habitual patterns don’t serve us. Unlike traditional notions of authenticity (“this is me, take it or leave it”), we need to carefully examine each situation.  We need to evaluate the different voices inside of us, and those outside, to make decisions for the benefit of those we lead.

The decision I made in the case of my daughter was to try to calm her down, and to let her know that I would not pick her up so she could avoid a bad grade. I wanted her to face up to the consequences of the choices she had made. Importantly, I wanted her to become present to the fact that we are always making choices, regardless of whether we consciously stop to think about them or not. Consciously or unconsciously, these choices become patterns, and then habits, and then a core part of who we are becoming every day as leaders. Here’s wishing we all stop to choose who we are being before we choose a course of action.

Henna Inam is the CEO of Transformational Leadership Inc. and author of Wired for Authenticity – now available on Amazon.  Learn more about her work at www.transformleaders.tv or connect with her on Twitter @hennainam.

Originally published on May 10, 2015 at http://www.transformleaders.tv/who-are-you-being-as-a-leader/

The post Who Are You BEING as a Leader? appeared first on Julie Winkle Giulioni.

Be Your Own Brand